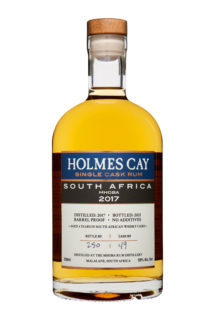 New York, N.Y. – Delivering on its promise to share rare and special rums to spirits lovers, Holmes Cay Rum has built a reputation over the past two years by selecting and releasing an annual series of limited edition rums. Now available, Holmes Cay’s South Africa Mhoba 2017 marks the first time South African Rum has ever been sold in the United States and the first time that rum from the Mhoba Distillery is available stateside.

“We are extremely honored to be the exclusive importer of the first US edition of this entirely unique artisan-distilled rum from the Mhoba Rum Distillery in collaboration with master distiller Robert Greaves,” said founder Eric Kaye. “We are proud to present this truly one of a kind rum to spirits lovers for the first time in the US.”

The Mhoba Distillery uses hand-cut cane grown on the adjacent farm, and distills from fresh pressed cane juice on a crusher designed by Greaves.  Both commercial and wild African yeasts are used in fermentation.  The pot stills which produce this richly aromatic and flavorful rum were also designed and built by Greaves.  This edition has been aged for four years exclusively in South African whisky casks.

Robert Greaves added, “When I first began distilling, my goal was to produce a spirit like a single malt whisky but made from our own sugarcane, grown on our farm. From the growing, hand-harvesting and crushing of our sugarcane right through to distillation in our self-built pot stills and the aging in ex-South African whisky casks, everything was done on our farm and distillery to create a pure rum which is truly unique.”

Tasting notes:  Grilled pineapple and rich cane on the nose. On the tongue, white pepper, light treacle, tropical fruit, and a hint of toasted fennel seed. On the finish, young vegetation and a puff of smoke.

The Holmes Cay Single Cask South Africa 2017 is now available for wholesale orders with a suggested retail price of $109 (750 ml bottle).  It is distributed in New York, California, Oregon, Colorado, Arizona, Tennessee, Illinois, Texas and Washington D.C. and is also available throughout the US via various online retailers.

Holmes Cay (pronounced ‘key’) Rum curates a continuously evolving collection of the best small-batch, limited-edition rums, distilled and bottled without additives. Single Cask editions are aged in cask, while Single Origin editions combine multiple casks and production styles to create exciting expressions from a given distillery or region. Find your bottle and stay informed at holmescay.com or get connected on Facebook and Instagram.

Eric Kaye founded Holmes Cay Rum in 2019. Frustrated that access to cask strength rums without additives was limited in the United States, Kaye saw an opportunity to focus on the hard-to-obtain aged expressions that he had encountered in Europe and the Caribbean, while championing increased transparency across the category. Kaye’s extensive knowledge of rum and relationships with highly regarded distilleries worldwide enable him to select, bottle and import rare casks and limited-edition blends, sharing his finds with discerning drinkers across the country.