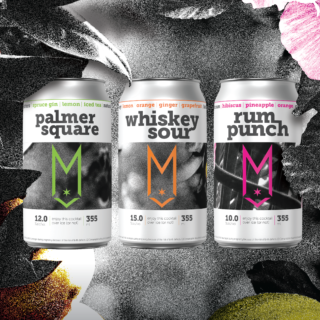 Maplewood Brewery & Distillery is excited to announce the launch of their first canned cocktails, set to release the week of July 26.  Primarily known for its beer, Maplewood’s distillery has been producing award winning craft spirits using a 250L Kothe Still since 2014. The ready to drink cocktails will join Maplewood’s Spruce Gin on retail shelves throughout Illinois, with further market distribution in the near future.

The initial lineup will consist of three sparkling offerings that each showcase the unique notes brought out by Maplewood’s spirits present in the cocktails:

Palmer Square: Maplewood’s Spruce Gin in a time-honored combination of Iced Tea and Lemonade. “We developed our Spruce Gin after experimenting with spruce and rooibos tea infused cocktails and the gin quickly became a house favorite,” says Ari Megalis, Head Distiller and Co-Founder. “The flavors of our Spruce Gin naturally compliment tea and citrus so well, that we knew an ‘Arnold Palmer’ inspired cocktail would be the best way to showcase its American contemporary style.”

Whiskey Sour: wheated whiskey masterfully blended with ginger, lemon, grapefruit, and locally produced orange bitters. Whiskey Sour finishes with vivid tart citrus that dances off the notes of fruit and barrel brought out by the whiskey.

Rum Punch: a unique reimagination of the classic. Orange and pineapple accompany an infusion of hibiscus and hint of cinnamon that make this a quaffable, fruity delight.

“Our spirit program has always been small, but we’ve been eager to share our products with our local customers. We’re excited for the opportunity to combine our production team’s knowledge of blending flavors to expand our spirits presence in the market, while continuing to grow our award winning spirits program,” says Patrick Terwedo, Maplewood’s Distiller. “We want to gin up some excitement because we have a lot of fun things on the way!”  All three canned cocktails will be available in 4-packs of 12oz cans, varying between 10-15% ABV depending on the variety. Among the first locations to offer these is Maplewood’s own Lounge, located in Logan Square at the brewery & distillery. Market distribution begins the week of July 26th with a suggested retail price of $16.99 per 12oz 4-pack.

The first of its kind in Illinois to establish brewing and distilling roots under a single roof, Maplewood has been producing finely crafted beer and spirits since 2014. Three years after moving into the production facility, Maplewood opened their Lounge, a neighborhood staple doubling as a taproom and cocktail bar. Beginning commercial distribution throughout Illinois shortly after settling into Logan Square, Maplewood has since expanded their distribution footprint into Missouri, Indiana, Wisconsin, and Kansas. Maplewood’s fans have come to expect expertly crafted beer and spirits in a wide range of styles.