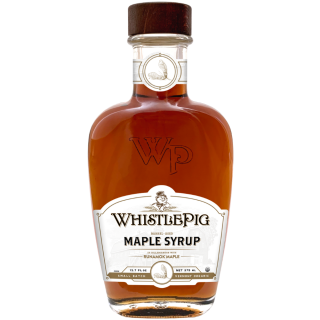 Fairfax, Vt. – Two award-winning Vermont producers, Runamok Maple and WhistlePig, have joined forces to launch a pair of handcrafted barrel-aged products this spring: WhistlePig Rye Whiskey Barrel-Aged Maple Syrup and WhistlePig Barrel-Aged Maple Bitters. Beginning May 15, the maple syrup will be available for general distribution, as well as for purchase at runamokmaple.com and whistlepigwhiskey.com, while the bitters will be used exclusively by WhistlePig for promotional purposes.

“The only thing more fitting than pairing maple with whiskey is pairing the Runamok Maple brand with the WhistlePig brand,” said Curt Alpeter, President and Partner at Runamok Maple. “We couldn’t be more thrilled about this partnership, and we think these two products are going to be a big hit among foodies and cocktail drinkers alike. We’re excited about the prospect of expanding our brand into restaurants and hospitality while helping WhistlePig enter the retail grocery market.”

Runamok Maple has been barrel-aging its pure, organic Vermont maple syrup for several years, but the new partnership with WhistlePig will see the maple producer age its syrup in the same Vermont oak barrels that the distillery uses for its classic Rye Whiskey. The WhistlePig Rye Whiskey Barrel-Aged Maple Syrup features beautiful notes of toffee and rye spice, making it a classic sweetener for cocktails as well as the perfect topper for desserts and breakfast favorites like pancakes, waffles, French toast, and crepes.

The WhistlePig Barrel-Aged Maple Bitters are made with a base of WhistlePig’s 15-year-aged Estate Oak Rye and Runamok Maple’s organic maple syrup. A unique blend of herbs and spices gets added to the base to create a beautiful version of bitters that will elevate a wide variety of cocktails with just a few drops.

“The use of maple syrup in cocktails continues to grow at a strong pace, and we’ve been working to find a nationally recognized brand partner that was equally obsessive about the quality of its products and could supply countrywide.” said Jeff Kozak, CEO of WhistlePig Rye Whiskey. “We found both of those attributes in Runamok Maple, and we’re thrilled with the first two products that have been released as part of this partnership.”

WhistlePig is the top distiller in the ultra-premium and luxury rye whiskey category in North America. The brand is known as one of the true innovators in the emerging field of North American whiskey.

Based in Fairfax, Vermont, and owned by husband and wife team Eric and Laura Sorkin, Runamok Maple is known for its growing collection of pure, infused, barrel-aged, and smoked maple syrups. Earlier this year, the brand expanded their product line to include a new collection of maple-based cocktail syrups and bitters. Runamok Maple’s products are available in select specialty food shops and markets across all 50 states, as well as online at runamokmaple.com and amazon.com.

Runamok Maple, a Vermont-based company owned by husband and wife team Eric and Laura Sorkin, produces organic maple syrup from its sugarbush located on the slopes of Mount Mansfield. Since 2016, Runamok Maple has been showcasing the versatility of maple with its unique line of pure, barrel-aged, smoked, and infused maple syrups – and most recently its collection of maple cocktail syrups and cocktail bitters. With over 1,000 acres of land in northern Vermont, the team at Runamok Maple manages 100,000 taps and works with over a dozen local maple producers to bring their pure maple syrup to consumers near and far. Boasting over a dozen varieties, including flavors like Bourbon Barrel-Aged, Smoked with Pecan Wood, and Cinnamon + Vanilla Infused, Runamok Maple is available for purchase on runamokmaple.com as well as in select specialty food shops across the U.S. and Amazon.com.

Founded in 2007, WhistlePig has become the #1 distiller in the ultra-premium and luxury rye whiskey category in North America, featuring the bold and often untapped flavor of Rye. WhistlePig is leading a surge of innovation in the emerging field of North American whiskey. As the most decorated Rye whiskey – having received the coveted ‘Best in Show Whiskey’ title from the 2017 San Francisco World Spirits Competition, WhistlePig is widely viewed as the world’s finest Rye. With the opening of its distillery on its 500-acre Vermont farm in the fall of 2015, WhistlePig has also become one of the leading farm-to-bottle Rye whiskeys in the world.