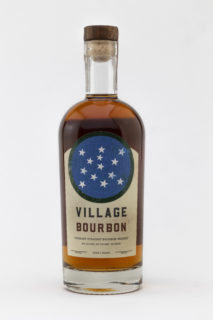 Bennington, Vt. — Village Garage, a newly-opened distillery in Bennington, Vermont, announces its first release, Village Bourbon, made from Vermont corn and rye and aged 5 years in American White Oak barrels. Inspired by the lands their families have farmed for over eight generations, friends and co-founders Glen Sauer and Matt Cushman are redefining Green Mountain-made spirits. Village Bourbon (SRP $50) and the distillery’s second release, Village Vodka (SRP $22), are now available for purchase at the distillery and throughout Vermont, with direct-to-consumer availability on villagegarage.com in late November.

“We want to make Vermont whiskey a category unto itself,” says Matt. “These will be whiskies that reflect the character of Vermont: the rugged beauty of the mountains and the bucolic friendliness of its citizens. Born and raised here in Bennington, it’s also great to be giving something back to the community.”

The Village Garage team is now barreling the first batches of in-house bourbon (due Summer 2023), crafted from local grains and water sourced from Bolles Brook, a natural stream on Woodford Mountain overlooking Bennington. The current bourbon release is made at a fellow Vermont distillery to Village Garage’s specifications, with the same mash bill and locally sourced corn and rye. It finishes fresh and warm, with noticeable toasted oak and butterscotch sweetness. The distillery’s second release, Village Vodka, is made from grain neutral spirits and Vermont rye and blended using fresh Vermont water. It tastes of white pepper and roasted corn and cream.

“I’m excited to be working with local farmers to create spirits everyone can enjoy,” says Head Distiller Ryan Scheswohl. “The past couple of winter rye harvests here in Vermont have been some of the best in recent years. Using these grains in our high rye mash bill yields a balanced bourbon that will be welcome at every table.” Ryan comes to Village Garage Distillery from award-winning Philadelphia Distilling Company, where he spent the past five years as a distiller creating award-winning spirits that are now distributed globally. A Philadelphia native, Ryan is also a certified electrician who has worked in manufacturing and customizing distillation equipment. The next two releases will be Village Rye and Village Smoked Maple American Whiskey.

Village Garage Distillery is housed in a former garage for Bennington’s highway department, and was known around town as “the village garage.” Glen happened to know it was up for sale, and after he and Matt discovered they shared a lifelong dream to build and operate a distillery, the idea for Village Garage was born. The stars on the bottle’s label come from the flag of the Green Mountain Boys, who were instrumental in fighting for America’s independence. They also represent the sky over the lands farmed in Bennington for generations.

“Whether visiting us in person for a tour and tasting or opening a bottle of our whiskey in the comfort of your own home, we want to transport our customers back to a time when you could feel the pride people took in their craft,” says Glen. “Our goal is to grow Village Garage into a premier Vermont spirits producer and destination.” Village Garage will open a restaurant specializing in local fare later this year. It is currently open for distillery tours and tastings.

Inspired by the lands their families have farmed for over eight generations, Bennington, Vermont natives Matt Cushman and Glen Sauer opened Village Garage Distillery in August 2021. Head Distiller Ryan Scheswohl is redefining Green Mountain-made spirits by using local grains and water to produce the distillery’s first releases, Village Bourbon ($50) and Village Vodka ($22). They are available for purchase at the distillery and throughout Vermont, with direct-to-consumer availability on villagegarage.com in late November. Follow Village Garage Distillery on Instagram.

The Virtual Venue is Open! Join Us Live Today at 3 PM ET