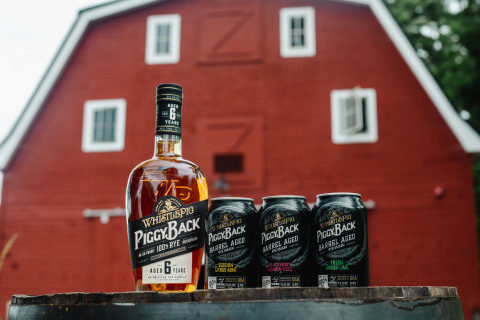 A bolder, more balanced and full flavored take on a seltzer, each can is locally crafted and independently made in the U.S. with all natural ingredients, and packed with 100% of the good stuff like fresh farm fruit and natural carbonation.

Jeff Kozak, Chief Executive Officer of WhistlePig exclaims, “We’re a restless and experimental team who love to fight the good fight for Rye, in whatever form that means. We thrive on testing out new, innovative, and dynamic ways to use our Rye. We crafted this drink with 100% Estate Rye directly from the WhistlePig Farm, and paired it with ingredients barrel-aged in our WhistlePig Rye barrels – staying true to our whiskey ways.”

Giving iconic cocktails a fresh twist, the PiggyBack Rye Smash comes in three delicious flavors – Blackberry Lemon Fizz, Session Citrus Mint, and Fresh Ginger Lime – for a refreshing take that is perfect for grilling, tailgating, cornhole, or catching up with friends around the bonfire. Expertly crafted like a good whiskey cocktail should be, each flavor balances fruit, citrus, and strength for a delicious, craft-inspired Rye beverage you won’t want to hit the outdoors without.

This game-changing canned cocktail will be available in four-packs (SRP: $17.99) in Georgia, Missouri, Vermont, Massachusetts, and Rhode Island, expanding across the U.S. in 2022. Each 12-ounce can contains 8 percent ABV and is best straight from the chilled can, making it the perfect ready-to-drink beverage.

Founded in 2007, WhistlePig has become the #1 distiller in the ultra-premium and luxury Rye Whiskey category in North America, featuring the bold and often untapped flavor of Rye. WhistlePig is leading a surge of innovation in the emerging field of North American whiskey. As the most decorated Rye whiskey – having received the coveted ‘Best in Show Whiskey’ title from the 2017 San Francisco World Spirits Competition, WhistlePig is widely viewed as the world’s finest Rye. With the opening of its distillery on its 500-acre Vermont farm in the fall of 2015, WhistlePig has also become one of the leading farm-to-bottle Rye whiskeys in the world.