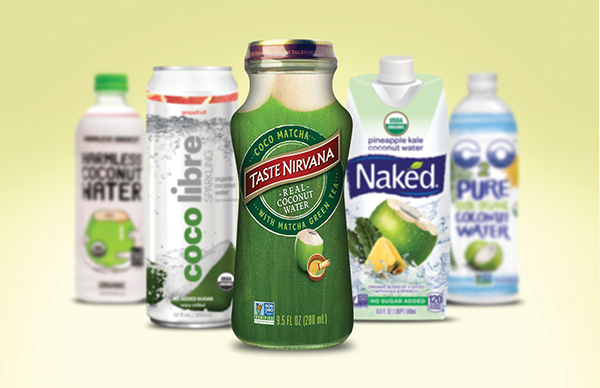 Coconut water has seen a surge of innovation of late with brands pushing the category into previously unchartered territories via new products, packaging choices and processing methods. And while 2016 has seen longtime category leaders make moves indicative of the massification of coconut water, there’s also been a renewed focus on the natural channel, as consumers continue to seek out offerings with organic, non-GMO and not-from-concentrate call-outs. That’s slightly counterintuitive to findings in late 2014, which indicated that the category was moving more heavily into conventional channels.

An analysis from retail data providers at SPINS and IRI at the time showed that there was a period of transition going on where consumers were stocking up on coconut water in conventional stores at lower prices. Since then however, there’s also been a growing recognition that the natural and specialty base of the category remains vital. In fact, one of Vita Coco CEO Mike Kirban’s priorities upon returning to a more active day-to-day role at his company was to more fully engage the natural and specialty channel, something he said he’s done over the past eight months.

So if coconut water has both migrated to conventional retailers but left an innovation tail in the incubation channels, that means there’s a lot of ground to cover in a category assessment. So let’s get started:

It seems like there is suddenly a land grab at the highest end of coconut water as longtime premium leader Harmless Harvest finds itself in a transitional phase. The pioneers of never heated, high pressure processed (HPP) coconut water, Harmless recently made the decision to switch from its signature process to a proprietary microfiltration one. The move followed a series of run-ins with the U.S. Food and Drug Administration (FDA) over the company’s ability to control bacterial spores through HPP alone. Whether other HPP coconut water brands like San Francisco-based Invo or recent category newcomer Sri Lanka Gold will eventually follow suit remains to be seen.

Meanwhile All Market, the makers of Vita Coco, is looking to redefine the terms of the super-premium coconut water category with the upcoming launch of Coco Community, an organic, Fair-for-Life-certified coconut water sourced from the same Nam Hom coconuts of Thailand’s Ratchaburri Province that Harmless Harvest uses. The product, which the company is calling its entry into the “artisanal coconut water” segment, undergoes UHT pasteurization as opposed to HPP and will launch nationally in May at Target and other natural and specialty foods retailers.

“Coco Community taps into a new audience for All Market,” said company spokesman Arthur Gallego. “The diehard foodies and purists are out there and they’re looking for these kinds of beverages and we wanted to speak to them.”

Other brands are leveling up too. ZICO recently made the move to return to its not-from-concentrate roots across its entire range while PepsiCo-owned Naked Juice has transitioned its coconut water to become USDA-certified organic. Longtime natural channel stalwart C2O has added a premium-aimed organic offering to its range as well.

Why all the attention for a channel that only represents about 4 to 5 percent of the category? It’s growing the fastest (much like that retail segment) — 58 percent in the last year, according to data from Vita Coco. 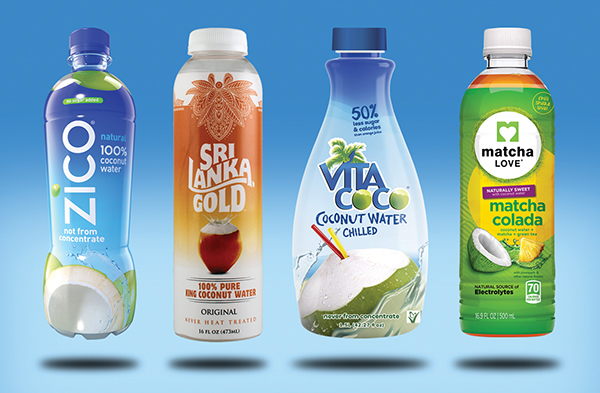 Once a beverage synonymous with Tetra Pak cartons, mainstream category pioneers Vita Coco and ZICO are both putting more of their product into new formats. In June Vita Coco will launch its largest offering yet, a 1.5 L size coconut water packaged in a PET bottle to be sold alongside refrigerated juices and dairy beverages.

“The evolution of different packaging and increasingly different price points is validation for the category,” Gallego said. “People have discovered that they can find a coconut water to fit into any part of their lifestyle and budget.”

“We created this package thinking about the consumer and their usage occasions,” said ZICO President Tom Larsen. “When you think about going into a drug store or a convenience store, between the hand feel and the cap, this bottle better meets consumers’ expectations than a Tetra would.”

As the category matures, traditional category dynamics start to take place — there’s a premium, conventional, and value set; currently, the leaders are playing to the premium set, but they aren’t afraid to go downstream, either, and packaging can reflect that shift. Kirban himself notes that “we continue to look at value as an opportunity as well, maybe in cans.”

Coco Libre is also getting into sparkling with the launch of four-SKU line of carbonated coconut waters in Original, Grapefruit, Cucumber + Lemongrass and Lemon Ginger varieties. The brand’s joined by Jax Coco and recently launched CocoMazing in the sparkling space. Other innovations in flavor have come by way of combining coconut water with other on trend ingredients such as matcha. Matcha Love and Taste Nirvana both recently launched coconut waters blended with the Japanese green tea powder.

It’s part of a growing movement to associate coconut water with different need states, one that has been tackled with protein infusions at Coco Libre, caffeine at erstwhile energy drink maker Hiball, and probiotics from brands like Inner Eco and GoodBelly. The core functional attribute of coconut water, hydration, continues to make it an ingredient in sports drinks like BodyArmor and Greater Than. On the refreshment side, Vita Coco has played with tea and lemonade blends, as has Zola; both have found limited success compared to tried-and-true blends like coffee and chocolate.

Meanwhile, as consumers continue to migrate away from traditional refrigerated juices like orange juice ZICO has put a strong push behind its ‘Chilled’ line of coconut water and juice blends, which ZICO director of marketing Meghann Seidner points to as “a big driver of a lot of the category growth.” The company recently launched Strawberry Banana as its newest addition to the line.

Still, the main point of distinction throughout the category has been freshness; that’s the ground where Harmless Harvest built its brand in the past. If it is able to maintain or improve taste quality without HPP, it may yet prove that sourcing is as important as process technology when it comes to coconut water. Such an outcome might also be good for Coco Community, but it depends on the ability of the fighter brand to eat away at Harmless’ brand strength at a time when its operations are in transition. Like any launch, it could fail for a variety of reasons, but one thing’s for sure, unfamiliarity with the category won’t be one of them.

Pulling back the focus from the specific developments in the category to its broader implications, a look at the numbers confirms that.

Vita Coco has been tracking import data and sales of coconut water in measured retail channels over the years, and the company estimates that the category is worth about $1.2 billion overall, along with another $650 million in imports.

Of the retail players, Vita Coco continues to dwarf its competition; it’s bigger than the next dozen smaller brands put together, and that includes ZICO, ONE and Harmless Harvest. Still, it’s a battle for share with a long tail, and as innovation initiatives indicate, it’s one with many beachheads. Companies aren’t done fighting for position just yet, but as for the category, retreat isn’t anywhere in sight.