It’s tempting to try to be all things to all people. With a good brand story, you can extend the values of flavors that got you into the business a long way, even add extra revenue to the top line to make you seem like a bigger fish. 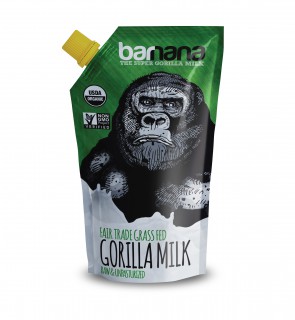 Caue Suplicy decided that with all this platform work going on, he’d try to build one of a different kind. Suplicy and rest of his team at Barnana, a snack food line made from bananas that would’ve been otherwise send to the garbage in his native Brazil, started telling the world a few weeks before Expo West that they had gone platform as well. Barnana was going into beverages with a special new product, gorilla milk.

They started promoting the new package – stored in a plastic pouch, with an illustration of a Western Lowlands gorilla on the front – on social media, via press release, even paying $2,000 to have it placed in the Expo West “New Products Showcase” section of the Anaheim Convention Center. The reaction was mixed. Some news organizations jumped on the story. The social media world was intrigued – or upset.

The team set the big unveiling for late Saturday afternoon, at the end of the second day of the three-day floor expo. They were going to drag a gorilla onto the floor, and milk the poor girl.

As the time drew nigh, at a show where stationary crowds typically only gather for free drinks or fights, a pretty big group was massing at the Barnana booth, and their neighbors were nervous.

The notion wouldn’t have been out of character. The team at Barnana has always had something of a zany affinity for pranks. At their first Expo, they wanted to cover extra ground, so they made a mobile booth, rolling it from station to station. On another occasion, Suplicy smuggled a remote-controlled drone into the show, dropping snacks and literature on retail decision-makers from the rafters. The team is known for dressing up in banana suits.

Still, no one knew which way the joke was going to turn in this case. Maybe they were just working on a bigger scale, some thought, but others thought that things were turning toward an unspeakably odd – not to say gross – new product line.

Things have been getting pretty edgy out there, after all. We’re deep into the age where a bottle of camel milk is making the rounds as a potential high margin mix-in to your homemade latte. Go online, and you can find stories of bodybuilders searching for human breast milk. We’re boiling bones and eating bugs, and brewing our coffee with butter. Why not extend the equity of a banana-centric brand into yet another farfetched but contextually conceivable branch of alt-dairy?

Because there’s a limit. And that’s what Suplicy and his team were pointing out.

He stood high at his booth, cups of brownish-white liquid on ice nestled in coolers, with a forest of straws protruding in front of him.

“It’s all about sustainability,” he said. “Just because we can milk a gorilla, it doesn’t mean we should.”

It became clear which way things were going when, instead of an endangered species, a dude in a gorilla suit showed up instead. Tensions eased quickly, eased even more when the crowd discovered that the cups of gorilla milk were really White Russians.

“Look, the point is, we hear a lot about what we can do,” Suplicy said. “That doesn’t mean we should. It’s across the board. The industry needs to come back to its core values. People are wasting things all the time.”

It’s a strange platform for environmental responsibility, but stranger ones have certainly been built in the past. One hopes we’ll pay take our cues from the Barnana team, who taught us to resist the temptation to go too far from a pretty out there place of their own.