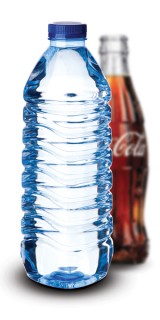 I’m pretty constant in my routine.

My morning work organizing never deviates. I take my afternoon constitutional when I don’t have lunch appointments, and that is followed by my 4 mile walk home every night. The elements be damned, I trek home in 10 degrees as well as 95 degrees.

When I arrive home I always turn on NBC Nightly News, something I’ve done for 30-plus years. (Unlike my client beverage companies, when it comes to news, I’m extremely brand-loyal, something I expect will extend to you all and your consumption of beverage trade media, hint, hint!) Sometimes it’s just background, but usually it’s in the forefront of my thoughts and attention. I like to be informed, and their coverage satisfies my quest to be knowledgeable.

The other night they had a teaser before a break about beverages, so I really tuned in. The report was startling, making the claim that bottled water had surpassed CSD’s as the beverage of choice for our populace. Per capita, water is the most consumed beverage. I’ve been following the industry and its trends for 24 years now, saw the inevitability, but here is was, in living, hi-def color.

Now, those of you who know me well will know that, before it was ever trendy, I’ve preached that this would happen. In all my years presenting and pontificating about beverages, I stated that bottled water, in all incarnations would become the top dog – and there was NBC saying it was so.

But what stunned me was that it appeared to have happened much faster than the timetable that I had assumed would make sense.

I called my long-time friend, Gary Hemphill, an industry stalwart with Beverage Marketing Corp., as they do a tremendous job of compiling consumption numbers, and he confirmed that this was about to happen, with home and office consumption as part of the calculations that were bringing it over the top. NBC may have jumped the gun a little, but the trend is cast in stone: within the next year, it will happen. Society has spoken, and the water category will indeed be #1.

Despite the fact that I called it long ago, the report has made me melancholy. I grew up on colas. Nothing was better than a cold Coke after a day of sports activity or just hanging with friends. It was an integral part of my childhood, and became a part of my adult lifestyle. During my early years in the industry, the CSDs drove the business and I made great friends and partnerships with those brands. They set the standard for terrific brands and sublime marketing. Early on, I thought that the ride would never end.

But the public’s desire for healthier living has led to this new reality. I have been part of the movement, as my preferences have changed. After all, I’m a consumer too. It is a trend that has no down side. The adjustments and acquisitions made by the CSD companies show their efforts to react to a new paradigm and make for a better beverage environment. Everyone benefits in the long run.

Still, healthier beverages will lead to a healthier life. Water has taken over the top spot. Long live the king.