While the 2017 Summer Fancy Food Show may not have included any apparent major revelations, it did further define the paths of many beverage brands as fast-growing trends continue to evolve.

It’s getting increasingly difficult to find a RTD coffee company that hasn’t launched a cold brew offering, and the style is gaining some footing in the tea world. Perhaps the biggest category take-away from Summer Fancy Food Show is not necessarily in the way cold brew is growing, but rather the way it is refining itself as brands compete in an increasingly saturated sector.

“Cold brew is getting to the point that it’s mass market, it is now the de facto cold coffee,” said David Belanich, CEO and co-founder of Joyride Coffee Distributors, which provides kegerator distribution for several prominent coffee companies including Rise, Grady’s, and Stumptown. “Most people making cold brew right now are saying that is Starbucks is doing it, then we’ve made a good decision.” 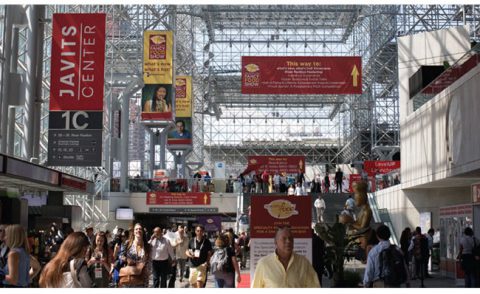 The convention was a showcase for two fast-growing cold brew companies that debuted their first RTD offerings. Grady’s Cold Brew, which previously made its name with a concentrate and bean bags, and Wandering Bear, known for its bag-in-box approach, both unveiled new lines of black single-serve options. Grady’s “Lil’ Easy” lines comes in 8 oz. glass bottles while Wandering Bear has opted for an 11 oz. Tetra Pak carton.

Several new coffee companies are also looking to make an impact in the market. Massachusetts-based Commonwealth Coffee Co., which launched in January 2016, sells single-serve, bag-in-box, and kegs. The company exhibited rebranded bottles and announced a pilot program to sell its coffee at Harvard University.

While not a cold brew coffee brand, Sunup Green Coffee offered a fresh take on the cold coffee sector with its unroasted bean blends, relaunching the brand in 16 oz. cans with unsweetened and stevia-sweetened varieties. It previously had a single, sweetened variety packaged in a 9 oz. glass bottle.

“We’re not riding the coffee trends; we’re lighter than cold brew,” Sunup founder Nate Pealer told BevNET. “We don’t think that we need to be roasting the coffee bean.”

Getting water from ground sources never goes out of style, but it’s becoming clear that tree-based waters are gaining traction in the hydration realm. 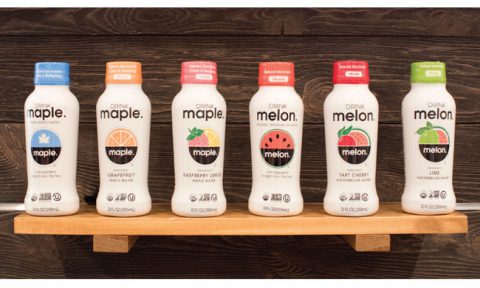 But while DRINKmaple has been making early gains to potentially headline the nascent maple water category, Asarasi, which brands itself as tree water is similarly using maple trees as a beverage source. CEO Adam North Lazar, says the brand is purely hydration-focused and is not presenting the drink as a functional beverage. The beverage is more similar in flavor and consistency to plain water and instead is making its play on being an environmentally friendly alternative to ground-sourced bottled waters.

As maple water is trending, however, it may find itself in competition with birch water. Several companies exhibiting at the show , including Sapp and TREO are backing their brands on birch-specific functional ingredients, namely manganese and chaga. Sapp debuted two new flavors, strawberry lavender and apple orange. TREO, which launched in September 2016, announced new distribution deals with KeHE and UNFI.

While natural tree waters are potential future players in the field, other enhanced waters are also becoming popular in the hydration field.

Bob Angus, CEO of Barsmith, said he sees a “democratization” of the cocktail mixer category happening as craft brands see steady growth while the “big boys” are starting to slump in sales. Barsmith, he said, has succeeded by being conveniently priced and by securing distribution in major retailers such as Target, but having higher-priced competition is good for the category and good for consumers who are beginning to seek more and better options for their alcoholic indulgence.

“We’re about convenience, while others have a little higher price and are more esoteric,” Angus told BevNET.

But esoteric and inventive are helping drive the category to new relevancy. The 2017 Winter Fancy Food Show indicated that the craft soda category is gaining interest in cocktail mixers, but the Summer Fancy Food Show shows that the dedicated mixer brands aren’t sitting by idly.

Swig and Swallow, a startup brand, is taking a risk by selling convenience in the form of half-full bottles of cocktail mixer that consumers can fill with the appropriate alcohol; just shake and drink. While the company’s founders are looking to improve packaging to make the message clearer to consumers, who may have subconscious hangups about buying half-full bottles, the company also demonstrates the creativity inside a category that increasingly appeals to a millennial demographic with a more refined palate for alcohol and a big desire for convenience.

Bittermilk, which markets more “traditional” cocktail mixers, is also appealing to consumers more party-minded cocktail drinkers with its new Bantam Bevy sister brand of user-friendly mixers. The company even recommends that, after a few drinks, consumers can fill the bottle with alcohol and have premixed cocktails ready to serve. 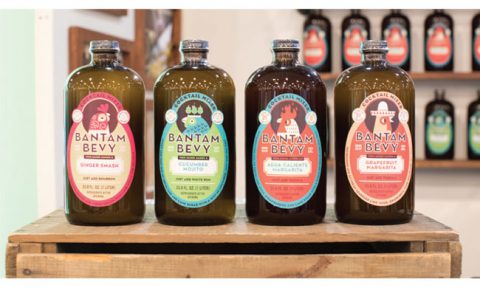 Although juice and kombucha brands were relatively quiet at SFFS, there were some rumblings of the future.

The rebranded Mansi is making a play to introduce a new kind of fruit juice to the U.S. market — the Filipino calamansi fruit. While consumer education is in store, Mansi notes on its packaging that the drink is a “new citrus experience” and offers a sugar-reduced lemonade alternative. The brand also totes its superiority to orange juice with a higher antioxidant content.

Garden of Flavor was a standout for the cold-pressed juice category at the show, presenting a rebrand with a new label for its Energy Elixir line and a new Reishi Pear flavor.

Kombucha brands, while riding high in the beverage world currently, had little to announce at the show, with many of the top brands in the category having shown off their innovation news at Expo West 2017. Health-Ade, however, has announced a reduction of its everyday price point to $3.99.

Buchi premiered a water kefir line, which includes watermelon mint, strawberry coconut vanilla, and ginger pear flavors. Managing partner Zane Adams called the line “different” for the kombucha company, calling the line a “Yin to the kombucha’s Yang.” The company, he said, has turned a focus toward craft recently and is also working to cultivate and refine a social health and environment mission.