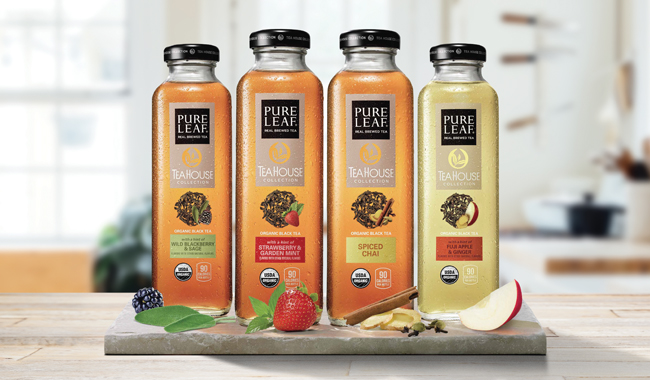 Millennials are changing the way tea brands think about innovation.

Although tea is generally perceived as a better-for-you beverage, millennials are pushing for an upgrade. And brands are responding.

Howard Telford, Head of Soft Drinks Research at global market research firm Euromonitor International, points to millennial and Generation Z consumers as propelling change in the tea category and trading up from value tea brands to premium and super-premium varieties.

According to sales data provided by Chicago-based market research firm IRI, Pure Leaf, which is promoted as “brewed from real leaves,” is now the top-selling brand in multi-outlet retailers, The brand pulled in over $714.5 million year-over-year in a 52-week period ending on June 17, 2018, up 7.9 percent. However, it’s sales of Pure Leaf’s Tea House Collection, a super-premium line of products brewed with organic, loose leaf tea, that provided one of the most notable leaps in the RTD tea category. Launched nationally in 2017, the products, which have a suggested retail price of $2.59 per 14 oz. glass bottle, saw sales soar by over 96.7 percent to $50.7 million.

“Younger U.S. consumers tend to prioritize all-natural and plant-based ingredients,” Telford said. “Both concepts are inextricably linked to what the younger consumer considers to be a ‘healthier’ beverage and – crucially – linked to what the consumer is prepared to pay more for on the shelf. This supports some of the trading up effect in the tea category.”

Aaron Abraham, director of Teavana, which markets a line of super-premium RTD tea, concurs. Based on internal research, Abraham stated that the Starbucks-owned brand is “seeing trade up and new entrants into the tea market largely driven by that younger consumer, that mid- to upper-aged millennial.” As a result, he described millennial consumers as the “sharp point of focus” for Teavana.

Launched at Starbucks cafes in February 2017, Teavana’s glass bottled drinks are brewed using premium tea leaves and botanicals and contain no artificial flavors. The teas, produced and distributed in partnership with beer giant Anheuser-Busch InBev, contain 100 calories or less and are sweetened with 21-22g of sugar per 14.5 oz. bottle, depending on variety. Available in herbal, green and black tea varieties, they have a suggested retail price of $2.39 and are now sold nationally at Starbucks locations and chains in several retail channels.

Abraham stated that Teavana beverages, which are promoted as “Craft Iced Tea,” are formulated to reflect millennials’ growing demand for high quality ingredients, sustainability and traceability.

“[Millennials] are ever increasingly more aware of what they’re putting into their bodies and where that product comes from.” he said. “We’re sourcing really wonderful ingredients, but we’re also blending them in a very artful craft sort of way that extends into the flavor development for the beverage as well. All the decisions down the line we harken back to that word, [craft]; does it pass the filter of craft? It’s a cornerstone of our brand proposition.”

Starbucks has set a goal of 100 percent ethically sourced tea by 2020, yet Abraham noted that the company doesn’t currently “spend a lot of time overtly talking about sourcing,” and that “in this day and age with our target consumer and our brand it’s becoming an expectation.”

However, it’s the ability to effectively communicate a sourcing and ingredient story that builds brand loyalty within the high end tea set, according to Euromonitor’s Telford.

“What makes the super-premium tea category unique, in my view, is the importance of storytelling with regard to ingredient origin, processing and functional appeal,” he said. “Whether we’re talking about Japanese green teas, Kenyan purple teas, Uruguayan yerba mate or other global styles of tea, there is a definite romance and aspect of discovery to the category that I think keeps consumers coming back.”

For Ito En North America, which markets a variety of Japanese tea brands, including Oi Ocha, Teas’ Tea and Matcha Love, having an authentic story about sourcing and traceable ingredients is as important as the liquid itself, particularly for millennial consumers.

“A lot of it goes back to the authenticity and heritage of the Japanese expertise, the Japanese quality,” said Jim Hoagland, the COO of Ito En North America. “Creating [these products] is a combination of art and science. Anyone can put the product in the bottle, but I think that we’ve got that unique combination of history and expertise to really create a great product.”

“Another advantage enjoyed by brewed beverages that leads to premium success is the rise of coffee house/tea shop/café culture,” noted Telford. “Consumers frequently learn about better, more premium styles and varieties of tea in café/tea shop locations, which are a hive of discovery.” The increased exposure to global tea varieties and trendy formulations is feeding innovation strategies for premium brands as they look to provide consumers with a differentiated experience.

Take cold brew, which emerged from coffeehouse culture to become one of the most important trends in the coffee business, one gradually extending into tea. Ito En, which has marketed bottled cold brewed tea in Japan for over a decade, last year introduced new varieties of the products for American distribution. At the time of their launch, Hoagland noted that while cold brew tea has been in the company’s innovation roadmap for several years, the U.S. coffee category has rapidly educated consumers about the benefits of the formulation and, in doing so, paved a path for tea.

Earlier this year, Tiesta Tea, primarily known for its loose leaf tea products, threw its hat into the emerging cold brew tea space with the launch of a five-SKU line of cold brew teas that are blended with fruit juice and herbs and contain no added sugar. Tiesta Tea co-founder Patrick Tannous described the products, launched in partnership with Target and sold exclusively at the retailer through June, as part of a growing cold brew trend that “is synonymous with younger, millennial, foodie-driven products.”

Tiesta also drew upon its extensive experience and capabilities in sourcing high quality tea to emphasize different flavor profiles, textures and functional benefits with each variety, such as “Energizer” Black Thai Tropical with Guava, “Slenderizer” Lean Green Machine with Agave. The result is brand versatility that Telford believes is key to the continued growth of the premium tea set.

“Tying functional ingredients to each SKU is something that [allows it to] operate across almost all occasions – as an indulgent beverage in some forms (chai, for example), as an afternoon pick-me-up with caffeine, as simple light refreshment or even as a hydration drink in some of its lighter forms.”

Meanwhile, a handful of companies are innovating with carbonated and nitrogen-infused tea. Teavana recently launched with two sparkling varieties that were introduced in June and come to market amid sustained consumer interest in soda alternatives and sparkling water. Available in two varieties, the brand’s Blackberry Lime Green Tea and Unsweetened Peach Nectarine Green Tea are line-priced and available regionally, with a planned national launch in 2019.

“I think tea is uniquely positioned if you can flavor it right to give the consumers what they’re looking for in a better-for-you sparkling beverage,” Abraham said.

On the emerging nitro front, a number of companies, including Connecticut-based Cold Brew Coffee Co., Harney & Sons, and B Sweet Coffee & Tea are following the lead of the coffee category and betting that the trend will catch on with tea. At the 2018 Summer Fancy Foods Show, Harney & Sons, a maker and distributor of premium loose leaf and bottled teas, introduced a new cold brewed and nitro-infused Hot Cinnamon Spice product. Packaged in a 12 oz. can, the product contains no sugar or calories, yet features a creaminess and sweetness derived from a combination of the nitrogen and blended flavors. Owner Paul Harney described the product as fitting into the purview of its older consumers seeking lower sugar varieties and millennials that are seeking innovative beverages.

“It [represents] a widening of our consumer,” Harney said. “It drives people to us because we’re able to make a great product without sugar. And it gets you in more unique places, like the functional beverage set, where we wouldn’t be otherwise.”