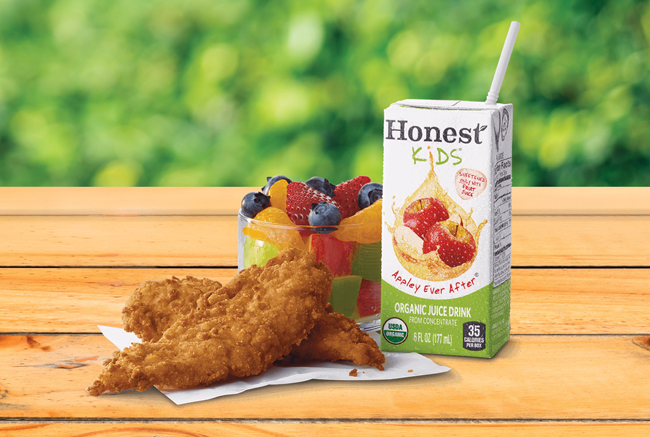 When Wendy’s and Chick-Fil-A added Honest Kids juice drinks to their menus in 2015, it was a watershed moment; the organic beverages became the first of their kind to be distributed in a national fast food chain.

Honest Tea, which markets the low-sugar and low-calorie children’s drinks as part of a platform that includes its flagship teas, juices and sports drinks, followed up those deals with one at McDonald’s, which in 2017 replaced Minute Maid apple juice boxes with an Honest Kids’ variety in its Happy Meals. According to Clare Koller, the general manager of the Coca-Cola-owned brand, the partnership turned Kids into a growth engine for Honest; Koller stated that 60 percent of brand revenue is now derived from the Kids line.

The impact of foodservice distribution goes beyond sales. For many consumers, seeing Honest Kids in fast-food restaurants is the entry point to the Honest portfolio and a foundation for the beverage platform as children mature and families grow.

“One of the things that we see is a huge opportunity with Kids to recruit families into our trademark,” Koller said. “What we’ve found is that when consumers see our product in a foodservice location, like a McDonald’s or a Chick-Fil-A or a Wendy’s, and they try it there, 74 percent of them are more likely to then purchase it at retail,” Koller said. “So we see foodservice as a great way to drive trial.”

Honest is one of a handful of brands that are emphasizing kids beverages as a way to attract awareness and trial for the rest of their portfolios. It makes sense: as parents increasingly turn to healthier options for kids, some executives see children’s drinks as a critical part of their futures.

Rethink Brands, which markets water packaged in paper-based cartons, launched in 2016 with a mission to reduce plastic packaging in beverages. While environmental sustainability continues to be a core tenet of the company, it has since adopted a focus of “healthy hydration” centered around its kids line, which co-founder and CEO Matt Swanson views as a jumping off point to a broader portfolio of better-for-you beverage options.

“One of the ‘aha’ moments for me [early on] was when I was speaking with a retailer and I’d shown them a kids version of Rethink Water,” Swanson said. “And they had challenged me to go look at the aseptic juice category, because it was acting very similar to CSDs and no one was really doing anything about it. And the same juice box I was drinking 25 years ago when I was five years old was the same juice box that kids are drinking today. We had the opportunity to bring really meaningful innovation into a really large category.”

Launched in May 2017, Rethink Kids was positioned as a product line “focused on eliminating unnecessary waste both inside and outside the box.” Packaged in 6.8 oz. cartons and sold in 8-packs, the drinks contain no sugar or calories and come in several organic flavor varieties including Fruit Punch, Strawberry Lemon Mango, Apple, and Berry, along with an unflavored option.

A few months after the launch of Rethink Kids, the company undertook a strategic pivot to de-emphasize its adult varieties, which come in unflavored one-liter and half-liter sizes, and instead focus its resources on the kids line. The strategy is paying dividends: the products are now carried in over 10,000 retail locations nationwide, including Walmart, Kroger, Target and CVS. The distribution gains are having “a halo effect” on the adult line, according to Swanson.

“We’ve made our bet on the kids side, and that’s the biggest opportunity in our opinion,” Swanson said. “The lack of innovation in the category from the big players and the amount of distribution that we’ve been able to achieve because of it, we will build our brand through Rethink Kids.”

On the dairy alternative front, Ripple Foods, which has already achieved significant distribution with its primary line of pea-protein dairy alternative milks, is positioning its Ripple Kids line as a key piece of the company’s “capture the whole family across the whole kitchen” strategy, according to co-founder and CEO Adam Lowry.

Introduced at Natural Products Expo West 2017, Ripple Kids is formulated with the same ingredients as the brand’s flagship products and comes in three shelf-stable flavor varieties: original, chocolate and vanilla. Packaged in 8 oz. cartons with a resealable screw cap and sold in 4-packs, the drinks are nut-free, contain 8 g of plant-based protein and are promoted as having 50 percent more calcium than dairy milk. They are sold nationally at Target, Kroger and Publix, and will be distributed at natural channel retailers in the coming months.

Lowry views the products as delivering value on multiple fronts to a growing cohort of millennial parents, particularly those that embrace a dairy-free or vegan lifestyle for their families. These consumers are increasingly seeking a nut-free dairy alternative that their kids can bring into schools, a growing number of which are banning nuts due to allergen concerns.

“Parents are really responding to the taste of course; kids like it and that’s the most important thing,” Lowry said. “And that it has protein, because, essentially, up until now unless you give your kids soymilk, they’re not getting the protein from dairy that they’re getting out of dairy milk if you send them to school with a non-dairy [product]. Of course, if you have a kid with a nut allergy they’re really loving it, but there are relatively fewer numbers of those. For other parents… that want to send their kids to school with a non-dairy option for a host of other reasons they can, because this is a non-allergen product.”

Both Swanson and Lowry said they’re currently looking for ways to innovate and grow with kids as they get older – and less inclined to drink from juice boxes and small milk cartons. Swanson believes that if brands can continue to meet evolving demands for kids beverages, they “can really build loyalty and ultimately grow with the consumer” through adulthood.

That mindset is shared at Honest Tea, which is preparing to launch a new product line for kids in their tweens and early teens. Honest Organic Juice Drinks will launch in early-2019 and come in two single-serve flavor varieties — Tropical and Fruit Punch — along with 6-packs of 10 oz. resealable PET bottles that come in three flavors — Blueberry Raspberry, Strawberry Lemonade, and Apple. They will be merchandised on shelves next to Honest Kids, according to Koller, who said the line was designed for 8-14 year-old kids who have outgrown a juice box or a pouch.

“That will be our biggest innovation for next year,” Koller said. “We just saw a white space opportunity from a package standpoint that’s resealable where the kids feel a little older holding this package and from a functional standpoint as well.”

It’s not the first time that Honest Tea created a drink line designed for older children. In February 2013, the brand launched Honest Splash, a three-SKU line of 12 oz. juice drinks that, like Kids, were sweetened only with fruit juice and contained 70 calories per bottle. Co-founder Seth Goldman described it as an “evolution of the Honest Kids brand,” which, at the time, accounted for one-third of total business. However, Splash was eventually discontinued, as it lacked a significant point of difference from Kids, according to Goldman.

Koller, a veteran Coca-Cola executive who joined the Honest Tea unit approximately a year ago, was unable to comment on the demise of Splash. However, she noted that amid the current momentum for Kids, the brand is attempting to shape and build upon an evolved palate for lower sugar products, from early-age to adulthood.

“In many ways it’s changing the palate of a generation so they’re used to these lower sugar options,’ she said. “And then when other products become available when they’re older, they know it’s a brand that they love and they trust and they’ll continue to drink throughout their lifespan.”