As cold-pressed juice moves into the next stage after its mid-decade height as a hot beverage trend, the subcategory continues to grow but leaves behind a reformed field of wholesale players marketing lower-priced offerings, alongside new competition from the private label space. Many brands that launched amid the category’s innovation wave in the first half of the decade have since moved on from juice: Forager Project, Sol-ti, and Pressery are just a few of these companies to shift their core focus towards other products. Meanwhile, early leaders in the sector such as Evolution Fresh and Suja have sought to expand their portfolios with new lines like kombucha, plant-milks, shots, and drinking vinegars in order to supplement their juice business and ride the growth of other emerging categories.

According to market research firm SPINS, in July retail dollar sales for the U.S. refrigerated juice market in the natural, specialty gourmet, and conventional multi outlet channels declined 1.9% to $6 billion – a loss of about $118 million driven largely by a drop in pasteurized juices. Within that space, branded high pressure processed (HPP) juices fell 8% to $107 million. Not reflected in those numbers, however, were private label HPP juices, which SPINS noted now accounts for 13% of the segment and growing. To boot, in the natural channel sales for branded HPP products were up 19.1% to $26.7 million.

While cold-pressed may provide a silver lining, as a whole, the category has suffered as consumers reduce their sugar intake. According to market research firm Euromonitor International, from 2013-2018 the U.S. market for all packaged juice products fell 5.7% from $19.3 billion to $18.2 billion. The decline shows no signs of reversing as the category is projected to fall as much as 7.2% by 2023 to $16.9 billion.

With juice at large lagging, Alexander Esposito, research analyst at Euromonitor, told BevNET that new consumers are still finding their way into cold-pressed juice “thanks mostly to being perceived as significantly healthier than other juice products which are suffering mostly due to their sugar content.”

Cold-Pressed Mainstreams at a Cost

While HPP and cold-pressed juice helped introduce a new style of premiumization into the juice category – trading on its improved flavor profiles, functional ingredients, and the perceived benefits of its processing method – the trend also came with a high price point, sometimes commanding prices north of $10 for a single unit.

Charlie Wettlaufer, president and CMO of juice press manufacturer Goodnature, told BevNET that he believes one contribution to the category’s shake out began around 2016 when leading brands began driving wholesale prices down in order to better compete on shelf in mainstream channels. With an influx of startups looking to seize on the trend, many in the category felt pressure to reduce costs to reach a $3.99-4.99 price point, Wettlaufer said. But as a result, quality suffered as brands reformulated their products to include purees and added water or tea. The companies that did maintain a premium positioning meanwhile struggled against significantly cheaper competitors.

“In order to compete on price, companies either had to shift away from real cold-pressed juice, or they just went out of business,” Wettlaufer said.

Wettlaufer said since the category’s peak, Goodnature has seen a slowdown in machinery sales to wholesale juice brands, while the on premise juice bar industry has continued to thrive. He attributed this to retail distribution struggles for cold-pressed products, noting the short shelf life, color changes, and consumer confusion over terms like “raw.” As such, quality-conscious consumers instead turn to freshly squeezed products offered by juice bars, which continue to command ultra premium price points.

Joyce Longfield, chairperson of the Cold Pressure Council, told BevNET that she agreed the push to lower pricing hurt the category in the short-term, noting that many smaller brands couldn’t compete with conglomerates like Starbucks and Coca-Cola, who had laid stakes in the category with Evolution Fresh and Suja respectively.

But while there’s still a market for premium fresh-pressed juice, she said, private label has become a more significant player in the space as retailers such as 7-Eleven release their own juice lines. Trader Joe’s, she noted, now sells its own multi-serve green juices and other grocers are following suit. The rise of private label, she said, signals a change in consumer demographics.

The juice cleanse diet trend – which peaked around 2015 – has largely fallen out of favor and given way to anti-sugar, anti-carb diets like keto and paleo, Longfield said. With the change in diet trends, the “niche,” health-conscious consumer has moved on from cold-pressed juice and in their place the “everyday shopper” has jumped on board.

“Unfortunately in North America we are very price driven,” Longfield said, adding that European consumers are much more likely than Americans to pay premium prices for health benefits. The average American consumer is more likely to make small steps towards health rather than adopt massive diets. As a result, lower-priced, private label HPP juice can expand the category – even if the product is watered down.

“Their mindset is more ‘I don’t have to go all the way, but if I’m being a little healthier then it’s good enough,’” she said. “If you think about it that is our North American philosophy, when you look at it across the board for any diet. ‘I’m not a vegetarian, but I try to have more vegetables.’” 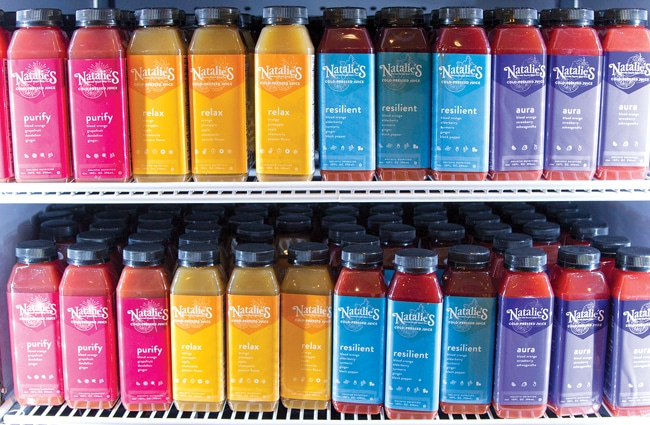 Among long time juice drinkers, however, quality remains an important pillar. With the competition in flux, the door for premium cold-pressed juice is not closed just yet.

Since it was founded in 1989, Natalie’s Orchid Island Juice has primarily played in the traditional juice category, and for years throughout the cold-pressed juice boom it seemed like the mid-sized brand would stay there. But in March, the company launched a cold-pressed “holistic” juice line with functional Purify, Relax, and Resilient varieties. The flavors are in line with many of the cold-pressed blends common throughout the category, and at Natural Products Expo East 2019 in September the company expanded the line with Aura, made with blood orange, strawberry and ashwagandha, and Replenish, a green juice with holy basil, aloe vera, celery and cucumber. The line retails for $2.99 per bottle.

Speaking with BevNET, Natalie’s VP of marketing (and namesake) Natalie Sexton said the brand deliberately waited for the cold-pressed juice category to mature before jumping into the HPP market.

“We didn’t want to be in the race with 100 other brands trying to bring their products to shelf,” Sexton said. “New products and trends gain attention and peak curiosity with the consumer, often times leading to impulsive purchases instead of long-term loyalty. We chose to wait and evaluate the performance of the cold-pressed movement and once the winning brands established their presence on shelf and with the consumer.”

According to Sexton, sales of the cold-pressed line have moved quickly with high velocities. But many of the line’s early adopters are already Natalie’s shoppers. The line, Sexton said, has created new use occasions for consumers who may only purchase a standard fruit juice two to three times a week, but will now make additional single-serve purchases on the cold-pressed line.

“Some other juice brands in the cold-pressed and functional space have relied primarily on a singular line, limiting the frequency of purchase for their brand,” she said. “Natalie’s is a brand that is built to last with the repertoire we have established with our customer base.”