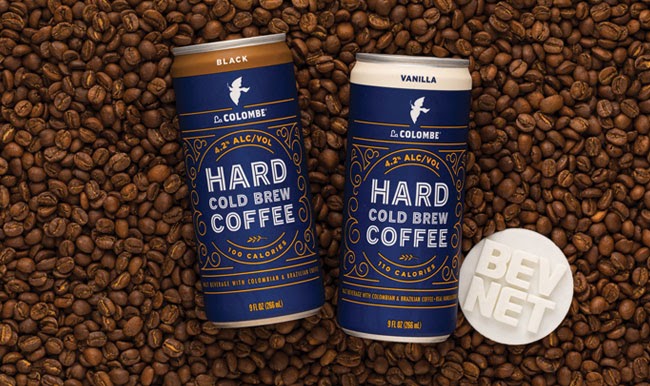 Coffee and beer brands are stirring the pot with new products blurring category lines that offer “hard” coffees appealing to a younger demographic of 21-plus consumers. Offering low ABV and a bit of caffeine, hard coffee began to grow last year as major coffee and beer makers expanded their portfolios to meet a set of consumer interests that have grown beyond traditional beer.

Last summer, Pabst Blue Ribbon rolled out Hard Coffee (5% ABV) with 30 mg of caffeine in test markets. It was followed in September by La Colombe and MillerCoors’ Hard Cold Brew Coffee (4.2% ABV), with 50 mg of caffeine, which launched with a limited run across four cities.

Different from low caffeine, coffee-flavored beers, hard coffee is a flavored malt beverage (FMB), a segment which saw dollar sales increase 43% last year, according to market research firm IRI, (much of that growth was driven by the hard seltzer boom). The brewing process for an FMB starts with a neutral malt base brewed similar to most beer, though the malt base’s hops, yeast and malt flavor, aroma, and color are stripped out of it. The resulting alcohol is then mixed with coffee and other flavorings.

With the alcohol category in “major flux,” La Colombe founder and CEO Todd Carmichael said that “decision makers are clearly paying attention to potential opportunities to re-stabilize,” and hard seltzer has added to the emerging category’s tailwinds.

“We realized we had to start branching out beyond just beer,” Newhouse added. “Beer sales are declining but other subcategories are starting to grow.”

In October, cold brew maker High Brew Coffee teamed up with New Belgium Brewing on Nitro Cold Brew Cream Ale, a product that toes the line between hard coffee and coffee beer, as the beer is directly infused with the brand’s cold brew coffee to pack a harder caffeine punch (20 mg per 12 oz. can) than many coffee-flavored beers (Harpoon Brewing’s Dunkin’ Coffee Porter has less than 3 mg of caffeine per 12 oz. serving).

High Brew Coffee founder and CEO David Smith said when he connected with the New Belgium team, they were looking to launch an “innovative initiative.” He said he sees synergies between craft beer and cold brew coffee (both often kegged with nitrogen) that make the two a good fit.

“Not only do they make a lot of sense to blend together, but they’re both rooted in the same foundation of complexity of how crafty you can get with both products,” he said. “I think all of that supports [hard coffee being] a longer term trend versus the shorter term fad.”

With the tagline “Rally Like a Grown-Up,” Carmichael said La Colombe’s Hard Cold Brew offers a healthier adult alternative to spirits mixed with sugary energy drinks, and as such fits into a variety of social occasions.

While it may be too early to determine the demographic most widely purchasing these new hard coffee products, both Newhouse and Smith said they’re a clear fit for younger 21-plus consumers, whether it be as a different vehicle for caffeine or a new form of alcohol.

“That trend of looking for more approachable ways to find your caffeine mends well with the craft beer world, and that will continue to grow over time,” said Smith.

Though these products had limited launches, brands are gaining confidence in hard coffee’s potential for growth. The New Belgium and High Brew collaboration is available through February, and Smith said it was well enough received — its initial production was intended to last 90 days, but ran out in 30 — that a “bigger partnership” could be possible. After launching in test markets, PBR began shipping its product nationally in January, with the goal to be in all 50 states in the coming months. Newhouse said this year Hard Coffee will be a “major part” of PBR’s portfolio, with a major media push in the works. Carmichael said the power of the localized launch helped the brand to “build strength” for a bigger national push.

“It’s difficult for me to imagine any coffee as a fad, including hard coffee,” said Carmichael. “Simply put, America’s beverage is coffee and has always been coffee. This is an extension of that love for the magic bean, a new time and place to enjoy our favorite beverage.”

One area that still has yet to be ironed out may be the category’s potential for regulatory interference: high-test energy brand Four Loko was forced to remove caffeine from its ingredients by the FDA after concerns rose about consumer injury; if ABV increased in these hard coffees, and concerns grow, could the next step be “Hard Decaf?”