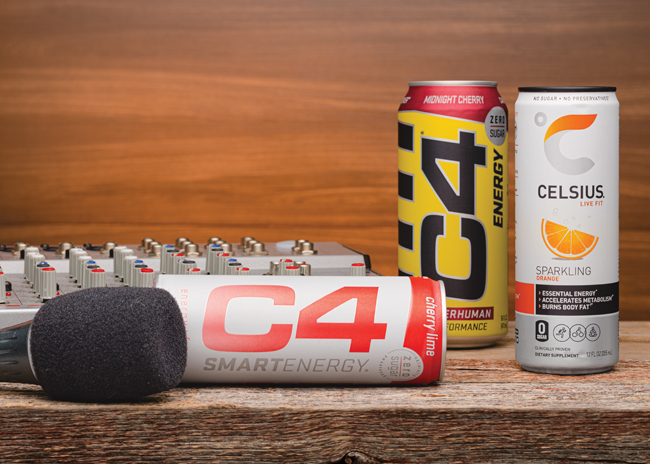 Last year, a once-in-a-century pandemic forced global industry to adapt within days. But even as the world came to a standstill, the nonstop, adrenaline-pumping, caffeine rush of energy drinks were not going to be slowed down.

Outside of restaurants and on premise, convenience was among the hardest hit channels for food and beverage sales as daily commuter traffic froze. That chilled revenues for energy drinks, where the bulk of sales are made through the grab-and-go cooler. Meanwhile, product lines were already facing disruption amidst the growth of a subcategory of performance and fitness beverages.

Now, as the fiscal year laps the onset of the pandemic, the energy category is seeing robust mid-double digit growth across the board. Market research firm Nielsen reported energy drink dollar sales were up 38.2% in the two-week period ending April 10 and up 12% in the 52-week period to $14.8 billion. Volume grew 41% and 14.7% over the same respective increments.

Analysts from Goldman Sachs Equity Research noted the elevated numbers were in large part due to the pandemic’s initial impact on the convenience channel. But the growth, they suggested, is not all relative, as the rising sales reflect the expanding consumer base and underlying growth that began long before COVID. As the world reopens and those work-from-home consumers return to the office and begin swinging back into the corner shop for their morning boost, they’ll be eyeing shelf sets that look radically different than the ones they remember from the “before times.” 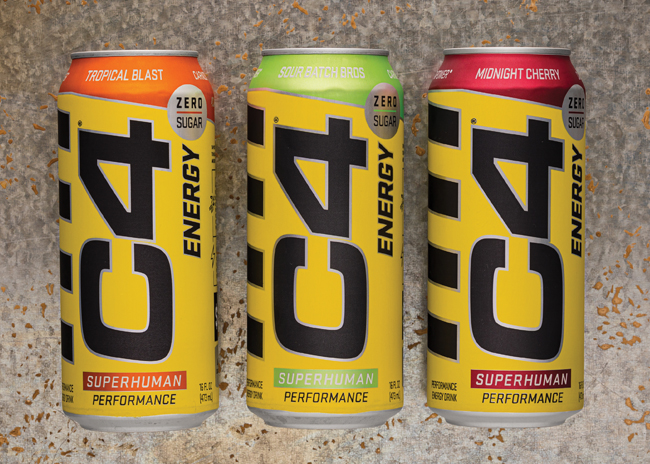 After facing months of declining sales and a peculiarly aggressive legal battle with its distribution partner PepsiCo, Bang has settled the dust and affirmed its position within blue trucks. With the growing pains of its transition from AB InBev coming to an end, the brand showed renewed strength with dollar sales rebounding 41.7% over the two-week period in the Goldman report; long term the bleeding has slowed to just -0.2% for the 52-week measure. As the brand gears up for its next act, however, it has emerged into a changed landscape. It’s archnemesis, Monster’s Reign line, has begun slowing down (down 0.7% in the 52-week period) but it faces a potential problem in the rise of CELSIUS and Nutrabolt’s C4, two longtime category players that appear to be approaching their moment.

“What Bang told the retailers was that, actually, there is space for other brands to potentially work in the energy category if they come with something different,” said Laurent Grandet, food and beverage analyst at Guggenheim Partners. “Since Bang arrived, you’ve had numerous new brands like CELSIUS, like A-Shoc, like C4. There’s plenty of entrepreneurial brands that are all by themselves offering different functionality and health, so it’s a much more fragmented business.”

Founded in 2004, Florida-based CELSIUS reported 222.8% dollar sales growth in the two-week period ending April 10, per Nielsen, and was up 81.7% for the year — not counting ecommerce and fitness channels, where the brand has a deep presence. The company now has about 1% market share of the category. Available in over 82,000 retail doors nationwide, CELSIUS CEO John Fieldly in part attributed the brand’s growth to the pandemic “catapulting” health and wellness trends forward.

About 20% of CELSIUS’ sales are in the fitness channel, Fieldly said, which was broadly shut down for months last spring and is still recovering. But even as impulse purchase opportunities plummeted, CELSIUS never saw a decrease in demand for its products, he said.

“The energy demand shifted from convenience to other outlets,” Fieldly said. “There were concerns in the energy category, about people working at home and brewing their own coffees and teas versus the energy drink at the office. So that was concerning, especially for us with those fitness locations closing down. But demand didn’t slow down, demand shifted to other channels.”

As the company emphasized omnichannel sales and marketing tactics, CELSIUS also benefited greatly from Bang’s move to PepsiCo by tapping the vacuum in the Anheuser Busch DSD network to migrate its own distribution system away from a direct model. The bulk of the brand’s DSD is now through AB InBev, Fieldly said. Most recently, the brand transitioned all 7-Eleven accounts on the West Coast over to DSD with more divisions planned to flip in the coming months.

C4 was another beneficiary of the Bang/Pepsi deal. Nutrabolt chief commercial officer John Herman called DSD “transformative” for the brand, giving it coverage in nearly the entire country. The brand previously worked with New York DSD house Big Geyser among other major distributors around the country, but it was able to pick up AB partners in the Mid-Atlantic, Southeast and Midwest markets that filled the gaps in its coverage and has fueled its next stage of growth.

C4 has also added some celebrity power this year, with the addition of comedian Kevin Hart as an investor. However, Hart’s got competition: hisfrequent big screen co-star, Dwayne “The Rock” Johnson, is putting his muscle behind a new brand in the better-for-you energy space with the Q1 launch of ZOA, a plant-based product developed alongside the Molson Coors Beverage Company. According to Goldman Sachs in their April ‘Beverage Bytes’ survey of c-store retailers, ZOA’s launch has been slower than anticipated as it fights for repeat sales in a crowded space and has yet to fully optimize its own DSD network. Many survey respondents said they plan to take a “wait and see” approach before stocking ZOA.

But, of course, even if the set in convenience is receiving a makeover, there’s still the familiar faces — though they too have gotten a touch-up.

Monster reported 31.2% dollar sales growth in the two-week period per Nielsen and was up 9.6% in the 52-weeks. According to Goldman Sachs, a big driver for the brand has been its new 12 oz. can line, which debuted in Q1, and the company has continued to focus on innovation. Likewise, Red Bull — up 20% in the measured 52-week period — has tapped into innovation as its key growth driver through its seasonal ‘Edition’ flavors.

In the current market, however, Monster has little room to breathe. As Reign sales slow, Bang has outpaced the performance line in distribution, Grandet said. PepsiCo’s efforts to revitalize Rockstar may also prove to be a problem for Monster in the near future.

“When Bang arrived three years ago, Red Bull’s market share didn’t move, it’s growth was really coming out of Monster,” Grandet said. “So I think with a more aggressive Rockstar, that would be probably positioned as a lower price product and more heavily promoted, [Monster] will again be attacked from underneath by a more aggressive competitor.” 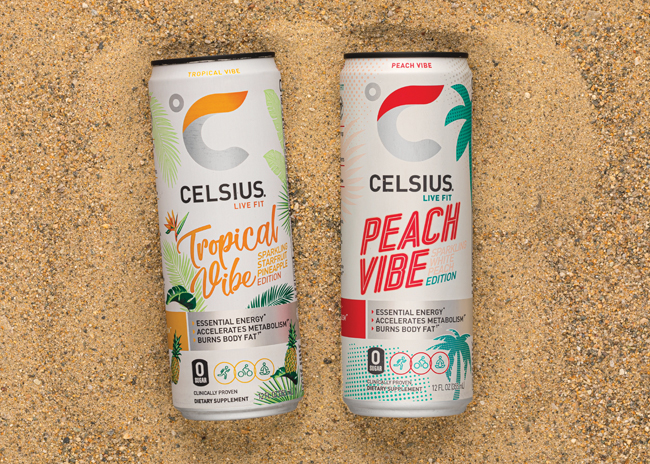 Even if the numbers on paper look good, the view from the streets is a little different. Jerry Reda, chief operating officer of Big Geyser (which carries both C4 and CELSIUS, and carried Monster for several years), called the COVID era beverage distribution business — at least in NYC — a disaster “substantially worse than 9/11.” Recovery in Manhattan has been slow and the long lasting effects of the pandemic have meant not just a temporary reduction in foot traffic for bodegas and drug stores, but a permanent loss of consumers as residents fled the city for, often literal, greener pastures.

“The chains — the 7-Elevens, the Speedways, the Wawas — they can weather the storm financially, but the independent retailers are struggling,” Reda said.

According to a December report by location analytics company Unacast, a net 70,000 people left New York City in 2020, resulting in roughly $34 billion in lost income. However, in a Reuters report, Unacast CEO Thomas Walle suggested the exodus in raw numbers is overstated while the bigger impact is changing demographics with an influx of low income residents.

To address the challenges of the pandemic, Reda said Big Geyser bought back all of its route owners and the company increased its service to make up for the collapse of fountain drink distributors. Now Big Geyser itself is well positioned: The company is in hiring mode and is looking to add additional routes. But Reda believes the New York market is the toughest it has ever been, noting that the up-and-down-the-street business is defined by a “survival of the fittest” atmosphere where many independent retailers are struggling to hang on while chain retailers weathered the storm. 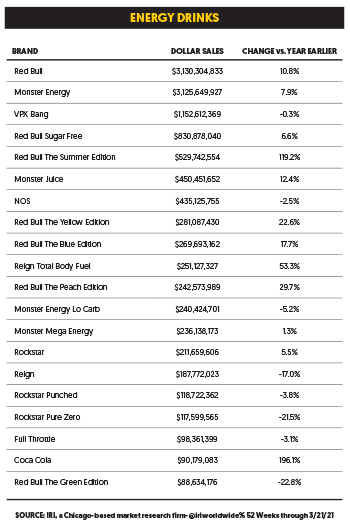 For energy drinks, however, Reda believes his stable horses C4 and CELSIUS are poised to be long term leaders in the category. According to Big Geyser’s internal syndicated data, the convenience channel market share in the New York market is shifting and C4 has taken a 2% share of the overall category (up 0.8% year-over-year for the period ending January 24) and CELSIUS took a 0.5% share (up 0.3%). Meanwhile, Monster’s share fell 1.5% in the same period to 25.2%. Red Bull rose 0.3% to 58.6% and Bang increased 1.1% to 6.6% share.

According to Reda, the new brands are succeeding on functionality and taste, which has brought in younger Gen Z consumers who are driving repeat purchases.

“[High school kids] view Monster and Red Bull as their grandfather’s energy drink,” Reda said. “Reign was basically just a defense move that Monster did to try to slow down Bang and they’re basically killing themselves while CELSIUS and C4 are just exploding.”