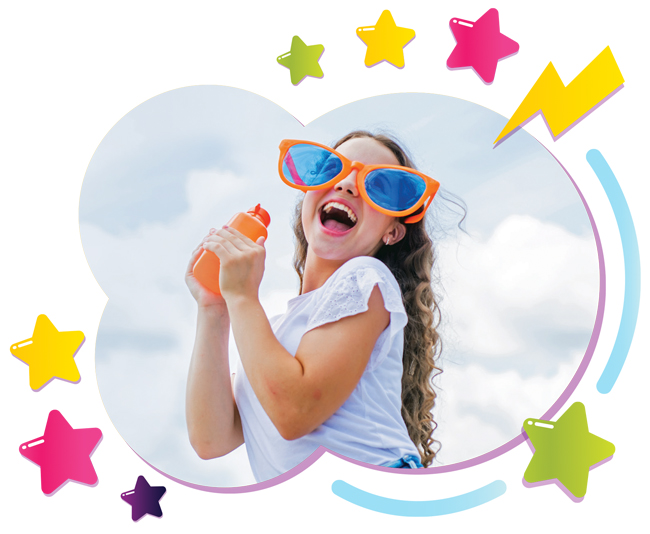 In an era of hyperconsciousness surrounding health and wellness, be it the need to boost immune systems or the dangers of sugar, it should come as no surprise that parents are taking more caution over their children’s nutrition. And as kids head back to school in person without vaccine approval for the under 12 set, while the pandemic has proven to be far from over, that concern is sure to be at the front of many shoppers’ minds.

Take these numbers as examples: In August, Whole Foods Market released the results of an online survey conducted by The Harris Poll finding that parents of children under 18 spent an average of 27.2 minutes per week reading food labels and considering the ingredients in the food and drinks they give to their kids. That’s about one day per year.

Beyond that measure, an 87% majority of the 626 parents polled said they were concerned about the ingredients in their children’s food and, certainly to Whole Foods’ delight, 69% said they worry less about these ingredients when shopping at retailers they know prioritize healthy and clean label products.

This is, of course, not just the result of a global health crisis, but the culmination of a years-long CPG trend. As kids beverage makers have continuously worked to move the category towards better-for-you options, innovative brands are now being presented with new opportunities to gain a foothold in a notoriously challenging category, because major retailers are seeking out kids products with clean label ingredients and low sugar content. But it’s that last step, from the retailer to the lunchbox, that entrepreneurs are finding as the part of the path that is anything but smooth.

It’s What’s In The Bottle 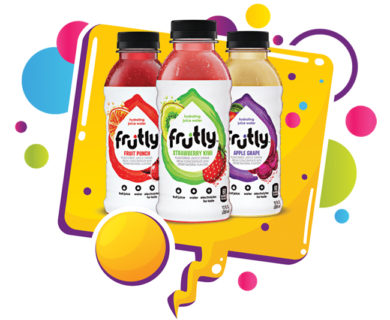 As functional beverages have emerged as a significant market for adult consumers, kids beverages are now seeing more innovations tailored around many of the same need states, including hydration, gut health, protein and immunity. But every parent knows it’s easier said than done to get a child to take something that’s good for them, leading to new products getting craftier in delivering full nutrition.

Beverage giants are joining entrepreneurs in the pursuit of a new breed of kid customer. The Coca-Cola Company has long had the Honest Kids line, and February saw the launch of Frutly, a new hydrating juice water brand developed by PepsiCo. Pitched towards kids and teens, each 12 oz. bottle contains vitamins C and E and contains no added sugars or artificial sweeteners. Frutly was presented as a direct competitor to high sugar fruit juices and brands like Capri Sun and Juicy Juice and is targeting major retailers such as Walmart and Albertsons. Large and mid-size brands are also stepping into the category; in December, Chobani launched its Little Chobani Probiotics yogurt smoothies as part of a broader line extension of probiotic heavy products.

While strategics are sending the signal to the industry that better-for-you kids drinks are a space worth investing in, midsize and small brands are simultaneously building their own innovation-driven plays.

In August, California-based dairy producer Clover Sonoma debuted Clover the Rainbow, a new platform brand of kids products beginning with a line of yogurt smoothies made with fruits and vegetables. Available in Strawberry Carrot, Blueberry Beet and Strawberry Banana Butternut varieties, the smoothies are intended to provide additional protein, calcium and probiotics for kids while using no artificial flavors or sweeteners.

According to Kristel Corson, chief revenue officer and VP of sales and marketing for Clover Sonoma, the Clover the Rainbow brand has “a full product pipeline behind it” that will build around the blend of nutritious ingredients in dairy foods and drinks. Not dissimilar from “hidden veggie” food lines like Kidfresh, the smoothie line emphasizes sweet flavors with low sugar to create a better-for-you product kids will want to consume. 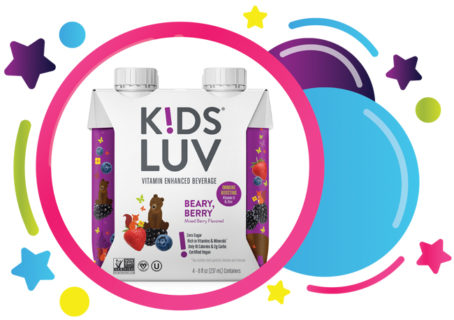 For California-based brand KidsLuv, CEO Ashi Jelinek said her goal is to bring the innovation of adult functional beverages into the realm of children via its zero sugar, vitamin enhanced beverages made with coconut water. Available in flavors that are perhaps less common in the American kids market, including Flying Fla-Mango, Starstruck, Coconut and Peach Me, I’m Orange, the brand launched last year and has now laid out ground in about 1,600 stores nationwide including Walmart, Target, HEB and Stop and Shop.

Initially intended to provide an alternative format to deliver kids vitamins (as opposed to tablets and gummies), Jelinek said she does see the landscape changing amid the pandemic. The brand is now launching a new Mixed Berry flavor containing Vitamin D and zinc to promote immunity.

“If there wasn’t the focus in your home already around ‘how do I keep my kids healthy?’ or ‘how do I add to their diet?’ Now, I think that even parents that maybe were never even interested in that are now interested in that,” Jelinek said. “I definitely think there’s this perfect storm of COVID, kids going back to school not being vaccinated, and how are you able to provide your kids with different immune options. So we’re a young brand, we’re really new, and I would say we’re just trying to offer parents an alternative to something that can be on the go.”

The Trouble with Retail

While the overall trend towards lower-sugar ingredient panels may be impacting traditional brands, it’s not always opening the door for innovative, better-for-you products. According to Theo Goldin, COO at Hint, many retailers have reduced the size of their kids drink sets in recent years making it more difficult for new brands, even one with pre-established awareness like Hint, to get on shelf.

“As parents have increasingly shied away from juice and juicy drinks over the past few years, the category space has been reduced, even though unsweetened flavored water sits within that set too,” Goldin told BevNET. “For several years we’ve been hearing things like ‘I wish I could give you even more space but the size of the kids drink set is being reduced.’”

Hint, a maker of unsweetened flavored waters, entered the kids set in 2018. But even as parents seek out these healthier products, Goldin said the limited shelf space can sow confusion as products like Hint Kids sit next to full sugar juices and juicy drinks, leading consumers to assume the drink is similarly loaded with calories or artificial ingredients. 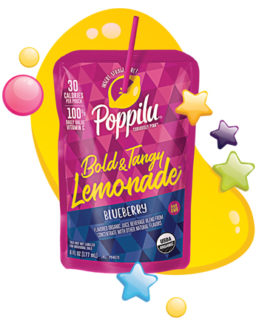 Despite the hurdles, Goldin said the line has seen swift growth, giving the company a much-needed edge within the minimal space allotted. But it’s still “a tiny portion” of the brand’s total sales. According to Nielsen, Hint’s overall still flavored water sales grew 93.3% to $117.3 million in the 52-week period ending August 28, primarily driven by its adult-facing flagship products. Hint Kids continues to expand however, most recently receiving chainwide authorization in Target stores, bringing it up to 6,000 total points of distribution, he added, and the company is now adding a second copacker on the East Coast to expand capacity and cut cost of shipping.

For Melanie Kahn, founder and CEO of reduced sugar lemonade brand Poppilu, the hustle to get onto store shelves has been further complicated by industry-wide supply chain disruptions that have led to rapid inflation in costs of materials, ingredients and freight. Those challenges put a strain on kids drinks brands which need to maintain low price points, while a lack of labor due to the pandemic has more directly led her company to hold back from expanding into new accounts.

While reduced shelf space may make it harder for startups to receive authorizations, the brands that are approved are now facing frequent out-of-stocks.

“The kids aseptic juice set has just been decimated,” Kahn said. “I mean, you go into any given retailer, and it’s one of those categories where there are just massive gaps on the shelf, huge blocks of just nothing.”

As of September, Kahn said she has enough inventory to carry her through, particularly as the brand has staked out space in the mainstream through retailers like Walmart and Target. Poppilu, whose organic lemonades contain just 30 calories and 7 grams of natural sugar per 6 oz. pouch, initially launched as a brand for adults but found more success focusing on the kids category. Poppilu’s reduced sugar approach has generated interest from buyers lately, Khan said, and in July the brand grew its footprint to over 2,500 accounts, including Stop & Shop, Lowes, Giant Eagle and several divisions of Albertsons. 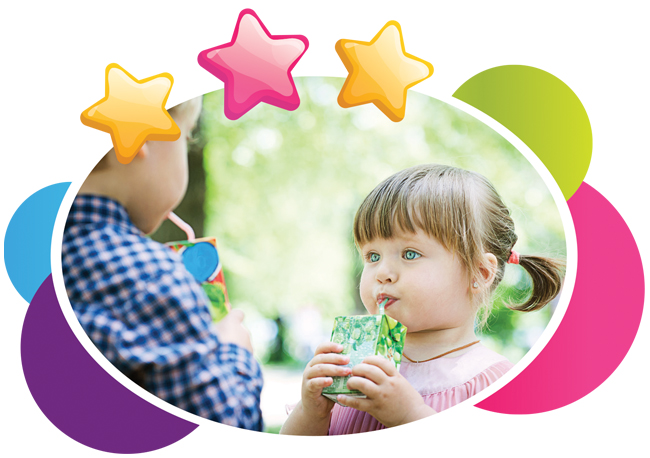 “What I’m hearing is that the more flavors you’re using, as opposed to drawing the flavor from juice itself, you’re getting very polarized reactions from the child consumer,” she said. “Because at the end of the day kids know what tastes good — things like apple juice or full 100% juice, that’s what tastes good. So when you start mucking around with alternatives … kids know the difference. So it’s about trying to find that balance between what’s going to taste good for kids and what meets the nutritional criteria.”

Likewise, Jelinek said that she has seen a broad openness to functional kids drinks from buyers she’s spoken with. Whereas it used to be the independent and natural channel stores leading the functional charge, she said, she’s finding that the larger mass and conventional chains are, in fact, becoming more active in curating innovation, even within their limited space allotments.

“You know, they have a lot of more data than I have, and I’m sure that what they’re seeing is the growing consumer base of millennial parents and younger generations who are really looking for healthier products that hit those different notes that they look for in their own adult products,” Jelinek said. “So I think in general, that landscape is changing. And I think we’ll continue to see it change.”