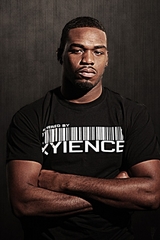 LAS VEGAS (Dec. 14, 2011) – XYIENCE, maker of Xenergy, the official energy drink of the UFC, is wrapping up 2011 with two huge victories for Team XYIENCE athletes Jon “Bones” Jones and Frank Mir at UFC® 140: Jones vs. Machida on Saturday, Dec. 10, 2011, at the Air Canada Centre in Toronto, Canada.  In the main event, Jones (15-1) retained his UFC light heavyweight championship title for a second time with his victory by standing submission over Lyoto Machida in the second round.  It was his fourth consecutive victory this year.

Frank Mir (16-5-0) added another victory to his now three-win streak by defeating Antonio “Minotauro” Nogueira by submission.  Dana White, UFC president, called Mir’s impressive victory “the submission of the century” at the post fight conference.  Mir, 32, has won seven of his last nine fights and now checks in as one of the top five UFC heavyweights.

“Jones and Mir are extraordinary athletes with focus, drive and heart that inspire millions of fight fans as well as our staff and brand,” says XYIENCE president John Lennon.  “We congratulate them on their well-deserved victories.”

Also on the fight card were Team XYIENCE athletes Mark Hominick and Krzysztof Soszynski, who lost their bouts by getting caught by opponents following aggressive attacks.

“The intense preparation and training that these athletes undergo before stepping into the octagon is incredible,” says Lennon.  “XYIENCE is proud of its entire team for their tireless commitment to becoming the best athletes possible.”

Jones’ image is featured on the second in XYIENCE’s collector can series, Xenergy Premium Cran Razz.  The 16-ounce sugar-free beverage can be found at XYIENCE retailers throughout the United States and Canada and can be purchased online at www.xyience.com.

Headquartered in Las Vegas, XYIENCE products support an active and healthy lifestyle and are held to the most stringent standards of excellence.  Visit www.xyience.com for details.

Xenergy is the official energy drink of the Ultimate Fighting Championship (UFC) and is one of the fastest growing brands in its category.  The first energy drink created by a nutrition company, Xenergy is a sugar- and calorie-free drink that’s fortified with vitamins.  All-natural flavors provide a consistent supply of energy, sans the “crash” inherent with most other energy drink brands.  Xenergy Premium flavors include Mango Guava, Cherry Lime, Cran Razz, and Blu Pomegranate.  Xenergy Xtreme flavors include Frostberry Blast, Fruit Punch, Cherry Rush, and Orange Fuel.  Xenergy is available throughout the United States and Canada.