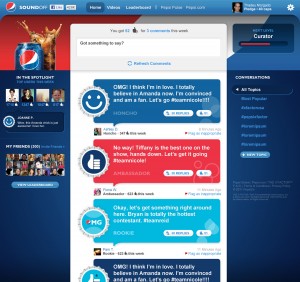 Proprietary Digital Platforms to Enhance TV Experience, Beginning with THE X FACTOR on FOX. Pepsi Sound Off Community Members to be Featured in Pepsi Creative to Air on THE X FACTOR.

Pepsi Pulse is a real-time digital visualization of the conversations taking place on the social web around key Pepsi entertainment properties such as THE X FACTOR. The platform shapes the volume of social data into a visual storyline and gives consumers a forum to follow the “pulse” of a certain topic or individual in real-time. Whether Pepsi Pulse is aggregating comments about the judges of THE X FACTOR or certain moving performances, consumers will collectively see a visual story about what’s hot on the social web right now.

Pepsi Sound Off allows THE X FACTOR fans to connect with each other and incorporates gaming mechanics to enhance the social TV experience. “We live in a world where people naturally watch a TV show and engage on-line about it – in real time. Pepsi Sound Off is a unique application that allows fans to do just that in an immersive, addictive and social fashion, which not only builds loyalty for a TV show but also deepens Pepsi’s credentials as an active participant in pop culture while dialing-up the entertainment for fans,” said Shiv Singh, Global Head of Digital, PepsiCo Beverages.

Users log-on to Sound Off using their existing Facebook or Twitter accounts and have the option to communicate solely on Sound Off or share their thoughts on other social media platforms. As users contribute their comments about the show, they can have their comments “fanned” by other users. Having the most “fans” will earn four users a place in the “Spotlight” and the reward of having their comment and profile featured on-air in a Pepsi advertisement during the broadcast. The more someone interacts with the site, the higher their rank will be eventually earning “ambassador” status within the platform.

“Pepsi does a remarkable job allowing its millions of consumers to engage with the brand and with each other,” said Patrick Salyer, CEO of Gigya. “This is one of the best implementations of social applications that Gigya has ever done. By powering the social functionality on the Sound Off community, Pepsi and Gigya are allowing THE X FACTOR fans to express themselves, compete with each other and make meaningful connections to Pepsi and THE X FACTOR.”

Pepsi’s partnership with THE X FACTOR provides the perfect pop-culture moment for the brand to introduce Sound Off as fans log on to “sound off” about the show. Both platforms are available in mobile format, will run concurrently through the duration of THE X FACTOR and are expected to continue past the show to drive social engagement around future Pepsi entertainment initiatives.

Tune in to FOX as THE X FACTOR judges Simon Cowell, Paula Abdul, L.A. Reid and Nicole Scherzinger continue their search for undiscovered talent 12 years old and over – both solo artists and vocal groups – who are worthy of the largest prize in television history: a $5 million recording contract with Syco/Sony Music and to be featured in a Pepsi Super Bowl commercial. Visit THE X FACTOR at http://www.thexfactorusa.com/

PepsiCo offers the world’s largest portfolio of billion-dollar food and beverage brands, including 19 different product lines that generate more than $1 billion in annual retail sales each. Our main businesses — Quaker, Tropicana, Gatorade, Frito-Lay, and Pepsi Cola — also make hundreds of other enjoyable and wholesome foods and beverages that are respected household names throughout the world. With net revenues of approximately $60 billion, PepsiCo’s people are united by our unique commitment to sustainable growth by investing in a healthier future for people and our planet, which we believe also, means a more successful future for PepsiCo. We call this commitment Performance with Purpose: PepsiCo’s promise to provide a wide range of foods and beverages for local tastes; to find innovative ways to minimize our impact on the environment, including by conserving energy and water usage, and reducing packaging volume; to provide a great workplace for our associates; and to respect, support, and invest in the local communities where we operate. For more information, please visit www.pepsico.com

About THE X FACTOR

THE X FACTOR is produced by Syco Television and FremantleMedia North America. Simon Cowell, Rob Wade and Siobhan Greene are executive producers for Syco Television. Cecile Frot-Coutaz, Richard Holloway and Andrew Llinares serve as executive producers for FremantleMedia North America. The show is scheduled to premiere this fall on FOX.

The format has received numerous honors worldwide, including three BAFTA awards, numerous NTA awards and the coveted Rose d’Or. In the U.K., an unprecedented 1.5 million iTunes downloads were made from “THE X FACTOR” contestant performances in 2010. Globally, more than 100 million records have been sold by artists launched through the series, including over 90 #1 singles and albums and 150 Top Ten records.

Gigya is the #1 social choice for websites, integrating online businesses with the top social networks and identity providers including Facebook, Twitter and LinkedIn, consolidating the most powerful social features in a single solution. The company offers a suite of social plugins such as Social Login, Share, Game Mechanics and Community features enabling sites to drive social registrations, scalable word-of-mouth marketing and community interaction. Through analytics, best practices, consulting and support, Gigya optimizes every implementation, delivering measurable social ROI. Supporting more than 700 million users each month across more than 500,000 sites, Gigya’s technology is the choice of global leaders in publishing and commerce including CBS, FOX Sports, Intuit, PepsiCo, The Home Depot, and Turner Networks. www.gigya.com