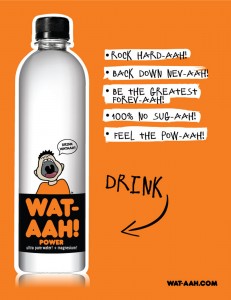 NEW YORK, Oct. 31, 2011 /PRNewswire/ — WAT-AAH!, a line of functional water for kids free of sugar or sweeteners of any kind, announces the launch of its newest advertising campaign to support the brand’s growing distribution in stores and schools nationwide. The campaign is direct and simple, focusing on the bottle, its screaming boy label, and the brand’s familiar bright neon colors. The headlines feature child-like hand written sayings and phrases that emphasize the brand name, and plays off its “-AAH!” ending while promoting the positive benefits of drinking water.

“We have met thousands of consumers while promoting WAT-AAH! across the country and have seen how our bottle instantly draws their attention, especially kids. We’ve seen them imitate the WAT-AAH! Boy and his scream. We’ve heard them create different sayings to follow the phrase Drink WAT-AAH! such as Feel SUP-AAH!, Run FAST-AAH!, Be SMART-AAH!, and so on,” says Rose Cameron, CEO/Founder of WAT-AAH! “In this campaign, we are simply capturing what consumers love most about our brand,” she adds.

The new campaign is set to launch nationwide November 1st and will include billboards, bus shelters, and phone kiosks advertisements as well as magazine ads and posters designed specifically to appear in schools that carry WAT-AAH! across the country. A special emphasis and greater media spending was also allocated to 10 markets including Atlanta, Boston, Charlotte, Minneapolis, New Jersey, New Orleans, New York City, Phoenix, Raleigh and San Francisco.

For over 2.5 years, WAT-AAH! has been convincing kids to drink water as opposed to sodas or sugary drinks. WAT-AAH! is the exclusive beverage partner for Beyonce’s ‘Move Your Body’ Flash Workout, supporting Michelle Obama’s Let’s Move! initiative. WAT-AAH! is available across the US in over 6000 stores/supermarkets as well as 1,500 schools/districts. http://www.wat-aah.com. For more information please contact Christine Widga at christine@wat-aah.com, 212-627-2630.