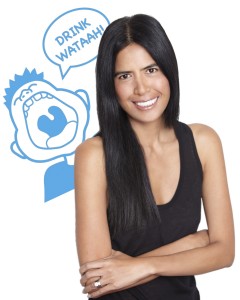 NEW YORK, December 7, 2011 — Rose Cameron, the creator and strategist of WAT-AAH!, a functional line of bottled water geared towards kids, lands a feature article in NYC’s Downtown Magazine Winter 2011 issue. Cameron, a  former advertising and branding executive and downtowner herself, is being recognized for breaking down the barriers of marketing health to kids and successfully tackling a highly competitive beverage market. She is also identified as a key contributor in the fight against childhood obesity, along side Michelle Obama and Beyonce Knowles. Specifically, in this issue of Downtown Magazine, these three women are featured and applauded for their outstanding work on encouraging healthy living in children and discusses how they came together for the global movement called the Let’s Move! Flash Workout! Event this past May.

This feature gives insight to Rose Cameron’s flourishing company, WAT-AAH!, which was sparked by her motherly concerns over health and influenced by her children’s wild imaginations. It also discusses Cameron’s strategic planning expertise and enumerates her innovative and contemporary ways to market and encourage healthy hydration among the most water averse audience -KIDS.

Downtown Magazine is a prestigious lifestyle publication that highlights all things quintessential to Manhattan.  The magazine informs and entertains with a sophisticated, yet edgy style and includes editorials on distinguished and renowned residents like Rose Cameron, and Beyonce herself. Previous issue cover stories include Leonardo DiCaprio’s green movement and Michael Bloomberg’s 9/11 10-year anniversary initiative.