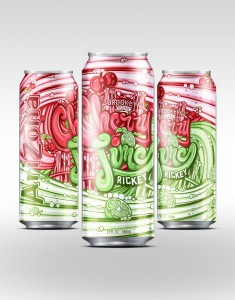 Following a three month campaign in which the company enlisted its Facebook fans and beverage media professionals to help choose its newest flavor, AriZona announced today that Cherry Lime Rickey would join its formidable cadre of tea and juice drinks.

The campaign, created in celebration of AriZona’s 20th anniversary, asked AriZona’s nearly 3.1 million Facebook fans to choose between three contending flavors – Orange Creamsicle, Chocolate Fudge Float, and Cherry Lime Rickey – and culled the opinions of a variety of people, including food and beverage writers, chefs, and randomly chosen consumers, to taste and write about the flavors in order to help fans decide on the winner.

BevNET’s own John Craven and Andrew Guard were two of the folks asked to be so-called “flavor panelists,” and we created a short video of their taste test back in April. It turns out that Craven and Guard know how to pick a winner, with both agreeing that the Cherry Lime Rickey was the best of the three flavors.

Here’s AriZona’ press release on the contest and its new Cherry Lime Rickey:

NEW YORK, NY— After an exciting three month long, never-been-done-before, 20th anniversary contest initiative, AriZona is proud to announce that its Cherry Lime Rickey design has been chosen by fans and will be sold exclusively at 7-Eleven stores as soon as September 2012.

The 20th anniversary flavor was consumer-chosen and its label was voted based on international submissions from designs submitted to AriZona’s microsite, arizona20years – Powered by Creative Allies, during the contest. Of the final five designs, fan Kenny Vidinich’s OneVibe design received the most fan votes for the winning label.  Vidinich is the creator of OneVibe creative studio located in Honolulu, HI, other finalists included: Ricky Linn of Pasadena, CA; Satchel Vestil of Cebu, Philippines; Manuel Peón of Mexico; and Tin Ba?i? of Croatia.

This is the first AriZona beverage to be completely created by fans and AriZona is proud to partner with 7-Eleven to make Cherry Lime Rickey’s debut on the market. With more than 6,700 stores in the United States, the convenience store king is the ideal partner making this 20th Anniversary flavor available across the country.

“The 20th Anniversary Contest is our way of thanking AriZona’s loyal fans, as well as allowing their voice and creativity to come to life. It is from them that we, as a brand, have always drawn our inspiration from and we want to make sure they know that we are fans of theirs as well,” explains Jackie Harrigan, AriZona’s Global Communications Director. “7-Eleven was a natural choice for us to debut and exclusively sell the Cherry Lime Rickey flavor. Just like AriZona products, 7-Eleven is American founded with stores accessible worldwide and has the same loyal consumer following.”

Cherry Lime Rickey will not only be available in 7-Eleven stores nationwide, but each can will feature a QR code that will unlock more prizes when scanned. The QR capability is another “first” for AriZona, and the brand hopes that it will demonstrate its gratitude to the fans for making it the number one ready-to-drink tea in the country with exclusive AriZona swag including a grand prize fully-wrapped all American vehicle.

For more information on this or any other AriZona product, please visit www.drinkarizona.com <http://www.drinkarizona.com> .
About AriZona
AriZona Beverages USA LLC was founded in Brooklyn in 1971 by Don Vultaggio and John Ferolito and to this day remains a privately held and family-run American business based in Woodbury, NY. AriZona Beverages—makers of AriZona Iced Tea, waters, juices, energy drinks, sports drinks and powdered tea mixes —is the number one ready-to-drink tea in North America and has begun worldwide expansion starting with South America, Europe and Asia. AriZona’s mission is to create the highest quality products, that not only look great, but taste great and are affordable for people to buy. For more information, visit www.drinkarizona.com <http://www.drinkarizona.com> .

About Creative Allies
Creative Allies is a social media platform that allows brands to host design contests on their own Facebook page, engage their fan-base and generate high-quality artwork. When brands work with Creative Allies, they receive access to a network of over 30,000 experienced graphic designers. Creative Allies is best known for its design community that produces marketing campaigns and top level graphics for rock stars and brands including the Warped Tour, MIA, Feist, the Shins, Beastie Boys, Janes Addiction, 20th Century Fox, Hyundai, Blink 182, Sony and LMFAO. For more information visit: www.creativeallies.com.