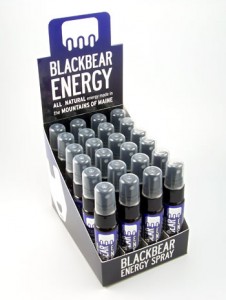 Bethel, Maine, March 27, 2012 — Black Bear Energy, LLC. is proud to announce their products 500X and Black Bear Energy Spray will replace Red Bull as the official energy sponsors at Tailgate Alaska April 1-12th in Valdez, AK. Going into its 5th year, Tailgate Alaska is the premier backcountry event in the United States based in the middle of Alaska’s legendary Chugach Range.

Skiers and riders access the mountains via helicopter, snowmobile and hiking in the terrain immediately surrounding the base-camp facility. Tailgate Alaska offers a nightly beer garden party, daily snow science classes and other activities to keep people entertained when not riding. Nationwide television coverage of the event will be broadcast on Fuel TV.

“We are honored to be an integral part of one of the top back country events in the world,” stated Ed Yasko, Managing Member of Black Bear Energy. “Tailgate will provide us with an unprecedented opportunity to connect our brand with our target market in an environment we are proud to immerse ourselves in. We will be actively networking with top athletes and sharing our brand vision as an independent and healthful alternative to established brands in the energy drink segment.”

During Tailgate, Black Bear will be providing product samples and gear, “Bear-ruit” games, and music.

Tailgate Alaska was formed in 2008 by Mark Sullivan (founder of SNOWBOARD magazine, and former editor of Snowboarder Magazine.) Held annually on Thompson Pass (Valdez, AK), the event has grown more than 1500% in the past 5 years, making it the World’s largest backcountry event and one of the only participation based events in winter sports. For more information visit www.tailgatealaska.com.