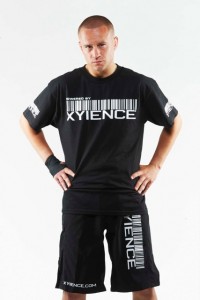 Hominick’s appearance coincides with UFC® on FX: Guillard vs. Miller that takes place on Jan. 20 at the Bridgestone Arena in Nashville, Tenn.

“I am always excited to meet MMA fans –they have been supportive of my career throughout the years and opportunities like this are a great way to say thanks,” says Hominick, who is slated to face Eddie Yagin at UFC 145 in Montreal on March 24.  “Many thanks to XYIENCE and Daily’s for putting this event together.”

Known for his exceptional skills in kickboxing and Muay Thai, Hominick, 29, has been a professional athlete since 2002.  The Ontario, Canada native grew up training in martial arts and now points to his current job title of UFC fighter as one of his greatest achievements. Along the way, Hominick has held a number of prestigious MMA titles including TKO Featherweight Champion, ISKA Canadian Super Welterweight Kickboxing Champion and IKF North American Super Welterweight Champion.

Hominick currently resides in Ontario with his wife and their young daughter. Along with other UFC fighters, Hominick is involved in a Toronto-area anti-bullying program.