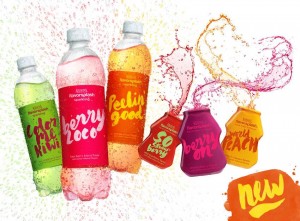 Amid the extraordinary growth of Talking Rain’s Sparkling ICE, yet another discontinued sparkling water brand has resurfaced, undoubtedly hoping to take advantage of the momentum for zero-calorie, flavored alternatives to soda.

On the heels of LaCroix Beverages’ announced relaunch of Spree, PepsiCo today re-introduced Aquafina FlavorSplash, a line of zero-calorie, flavored and carbonated waters. The brand, which first appeared in 2005 and was dropped after a few months on the market, has returned with a new look and branding that leans toward a younger set of consumers. The return of the brand also comes with a new line of liquid water enhancer products — PepsiCo’s first foray into the category, which was pioneered and is dominated by Kraft Foods’ MiO brand.

The relaunch of Aquafina FlavorSplash’s carbonated water products features a similar formulation to the initial version of the drinks. The zero-calorie beverages are artificially sweetened and contain natural flavors and added B-vitamins. Packaged in slim 16.9 oz. plastic bottles, the brand comes in three playfully-named flavors: Color Me Kiwi, Peelin’ Good and Berry Loco.

The new products are aimed attracting 13-to-19-year-olds to the Aquafina trademark, according to a recent article in Advertising Age, which spoke with Simon Lowden, the CMO of Pepsi Beverages North America.

“We haven’t done an awful lot with the trademark, aside from pure water,” Lowden told Advertising Age. “This will help our schools proposition. Aquafina is a great proposition in high schools, and this is a great chance to expand and bring in a more relevant proposition.”

Aquafina FlavorSplash liquid water enhancers are one of a bevy of new entrants into the water-enhancement category. The artificially sweetened products contain zero-calories per serving and are packaged in 1.62 oz. squeezable containers, each with 24 servings. Like their sparkling water counterparts, the line features three flavors with lighthearted names: So Strawberry, a wild strawberry flavor, World Peach, a peach mango flavor, and Berry On, a mixed berry flavor.