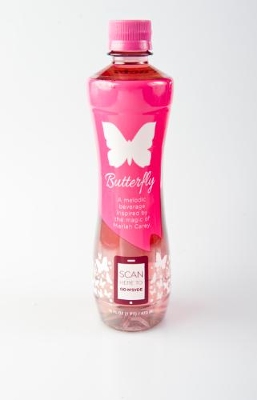 By holding any smart phone device up to a Go N’Syde bottle, customers will be able to access an entertainment network curated by Global Superstar Mariah Carey, allowing them a behind-the-scenes glimpse into her world — #NoFilter! Customers will be treated to a private experience, blurring the lines between consumption, culture, entertainment – and reality.  The ground-breaking collaboration is launching with a multi-million dollar campaign and commercial using Mariah’s hit song, “Thirsty” from her critically-acclaimed new album, Me. I am Mariah…The Elusive Chanteuse.

The first partnership of its kind, Mariah Carey and Kevin Liles will revolutionize the entertainment and consumer marketplace by providing an innovative and personalized platform that grants fans unprecedented access to history-making content in the form of augmented reality. The result is a never-before-experienced intersection of pop culture brought to Walgreens customers easily and affordably via their favorite neighborhood location.

“I am thrilled to partner with Mariah Carey as she embarks on this new journey as CEO of her own beverage and virtual network,” Liles says. “Mariah is an icon and one of the world’s most premiere artists, and with her Butterfly network, she is able to invite fans into her world like never before.”

“It’s easy to see why I’m ‘so obsessed’ with my new drink Butterfly,” Carey says. “I never dreamed that I could have an interactive experience with my fans while drinking my own beverage! The whole concept is innovative and refreshing and the drink is beyond… Tastes so good! Looking forward to sharing many splashes with you. Cheers!”

Mariah Carey is the best-selling female artist of all time with more than 200 million albums sold to date and 18 Billboard Hot 100 #1 singles (17 self-penned), more than any solo artist in history.  Mariah is a singer/songwriter/producer recognized with multiple Grammy Awards, 21 American Music Awards, Billboard’s “Artist of the Decade” Award, the World Music Award for “World’s Best Selling Female Artist of the Millennium,” and BMI’s “Icon Award” for her outstanding achievements in songwriting, to name a few – with her distinct five-octave vocal range, prolific songwriting, and producing talent, Mariah is truly the template of the modern pop performance. Mariah Carey’s ongoing impact transcends the music industry to leave an indelible imprint upon the world at large.Mariah Carey made her entree into the world of independent film with her breakthrough performance for her role in WiseGirls staring alongside academy award winner Mira Sorvino and Melora Walters. In 2009, she was recognized with the Breakthrough Performance Award at the Palm Spring International Film Festival for her critically acclaimed role in Lee Daniel’s “Precious” and most recently appeared in his latest stellar ensemble in “The Butler” (2013). A Congressional Award recipient, Mariah has generously donated her time and energy to a range of philanthropic causes near to her heart including Save the Music, the Make-A-Wish Foundation, World Hunger Relief, and the Elton John AIDS Foundation, among many others. A tremendous supporter of children’s charities, both domestic and international, Mariah founded Camp Mariah in partnership with the Fresh Air Fund, a retreat for inner city children to explore career development. Mariah released her critically-acclaimed new album, ME. I AM MARIAH…THE ELUSIVE CHANTEUSE on May 27, 2014 (Def Jam Recordings).

Go N’Syde is based in New York City. Kevin Liles serves as its Chief Creative Officer and exclusive Curator of Content.