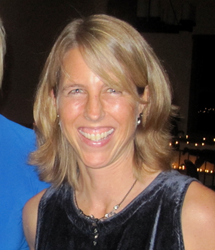 Burlington, Vt. (PRWEB) April 20, 2015– 1% for the Planet, one of the world’s largest environmental networks, is excited to announce that Kate Williams, the network’s Director of Partnerships, will step into the role of CEO, effective May 1, 2015.

Williams has been part of 1% for the Planet since early 2014, following her nearly decade-long tenure as Executive Director of the Northern Forest Canoe Trail, a 1% for the Planet nonprofit organization. Williams has dedicated her career to the stewardship of and advocacy for the outdoors, a commitment which is shown through her former role as Chair of the National Outdoor Leadership School (NOLS) Board of Trustees. Since joining 1% for the Planet, her commitment has already led to the creation of new strategic and impact partnerships that have led to new opportunities for network engagement.

“We are thrilled to support Kate in her new role,” said Adam Forest, 1% for the Planet’s Chair of the Board. “Not only does her personal ethos align perfectly with the network’s mission to protect the places we work and play, but her professional success towards these goals has been well-demonstrated through her many years of achievement and recognition in the industry. We know the network is in good hands with Kate at the helm, and we look forward to the continued progress we know will come under her leadership.”

1% for the Planet was created in 2002 by Patagonia founder Yvon Chouinard and Craig Mathews, owner of Blue Ribbon Flies, as a way to connect environmentally conscious brands with likeminded businesses and nonprofit organizations. The network works with over 1,200 member businesses worldwide across all verticals, including: outdoor, food and beverage, business services, apparel, and more. The movement, which began with only 21 brands, has contributed more than $115 million in cumulative giving. The network now welcomes not only business members and nonprofit partners, but ambassadors, media partners, trial partnerships, and next, individuals through its soon-to-be-launched Blue Crew program.

“I truly believe in the 1% for the Planet model and the role business has to play in creating a healthy planet,” said Williams. “We have a strong internal team, a powerful network of member companies and nonprofit partners, and amazing collective potential to increase our scale and positive impact. With only 3% of current philanthropy going to the environment, 1% for the Planet’s cultivation of a global network of corporate environmental philanthropy couldn’t be more important. I am honored to lead this organization into its next chapter.”

Williams will replace interim CEO John Tashiro who had stepped into the role following former CEO Terry Kellogg’s departure in 2014. The transition will begin in April, with the role becoming official on May 1. Any inquiries about the announcement can be directed to Barbara Friedsam, senior director of marketing, at barbara(at)onepercentfortheplanet(dot)org.

About 1% for the Planet
Started in 2002 by Yvon Chouinard, founder of Patagonia, and Craig Mathews, owner of Blue Ribbon Flies, 1% for the Planet is a platform of credibility and engagement for environmentally conscious brands that are truly committed to making a positive impact with their business. This global movement of more than 1,200 member companies in 48 countries donate one percent of annual sales directly to approved environmental organizations worldwide.

To learn more go to: http://www.onepercentfortheplanet.org.