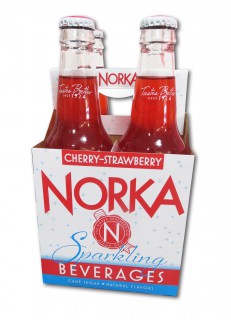 Michael Considine, an Akron native, recently discovered that the iconic brand had been missing from Akron’s shelves for 53 years.

“After coming across one of the vintage NORKA bottle labels, I began researching the history of the brand only to find out that it had been dormant for years,” said Considine.

Having worked in the beverage industry for the past five years, Considine was eager to breathe new life into the classic Akron beverage and has been working since early 2014 on bringing back Akron’s very own craft sodas.

“With the resurgence of craft sodas in today’s beverage industry, the timing was perfect for NORKA to makes its return. One of our main focuses in reviving NORKA was to take the original recipes and create healthier formulas while maintaining the same, great tasting flavors.”

NORKA Sparkling Beverages are currently available in the original four flavors of orange, ginger ale, cherry-strawberry, and root beer. The premium sparkling beverages are made with pure cane sugar, 100% natural flavors and are both caffeine and gluten free.

NORKA is also being served up at local eateries such as the Merchant Tavern, Larry’s Main Entrance, Primo’s Deli, Jilly’s Music Room, Something’s Popping, BLU Jazz+ and others.

Considine is grateful for the welcoming response Akron has had with the return of NORKA Sparkling Beverages.

“The positive response from the community has been overwhelming. Revitalizing a high-quality product that proudly carries our city’s name, even if it is backwards, has been an incredible experience.”

Look for NORKA Sparkling Beverages at upcoming community events such as Crafty Mart, the Soap Box Derby, Akron Summer Concert series, Lock 3 events and many more to be announced.