HOLLYWOOD, CALIFORNIA – Dedicated to supporting charities while delivering great beverages is our core mission, so when Ryan Fisher, star and ‘birthday boy’ featured in “My Fab 40th” reached out to support the work of the Trevor Project, we happily accepted and left for Hollywood to throw an event like none other!

Sponsorship of the event helped raise thousands for Trevor Project, a leading suicide prevention organization focusing on LGBT youth, while guests enjoyed Positive Beverage under the stars on the rooftop of the W Hollywood Residences. The private party was filmed by the production company, Purveyors of Pop and finally broadcast on Bravo! nationally, highlighting 39-year old socialite and philanthropist, Ryan Fisher, as he turned 40. 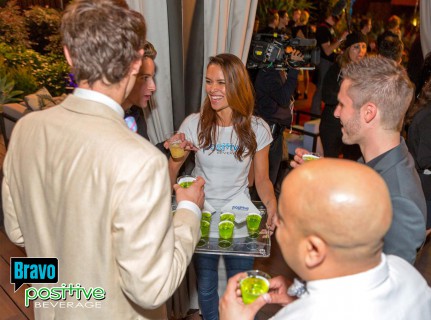 Ryan Fisher comments, “Zach [Muchnick, VP of Positive Beverage] just asked how he could help when I told him I wanted ideas on how to raise money for Trevor [Project] at the televised party. I couldn’t be more thrilled that he helped us raise money and show guests a great beverage that focuses on a positive outlook!”

“My Fab 40th” and/or Bravo Media LLC is a division of NBCUniversal, a Comcast Company. No endorsement, affiliation, or promotional consideration is implied or assumed.

About My Fab 40th: When it comes to over-the-top birthday parties, forty is the new sweet sixteen! Bravo Media takes viewers into the world of wildly extravagant fortieth birthday parties in My Fab 40th. From lavish venues to priceless gowns and custom cakes, these 39-year-olds are kicking off the next chapter of their life with a bang. Marriage proposals, vow renewals, and even live “conscious uncoupling” are featured in this series that celebrates the milestone birthday and the journey to get there.

Positive Beverage was born when its founders were looking for a simpler, healthier alternative to energy drinks and enhanced waters, but couldn’t find one. They filled the need for simple, clean, good-for-you beverages with a refreshing portfolio of drinks that taste great, too! Whether you choose Positive Charge, with natural energy from green tea, or any of the three fresh flavors of Positive H20, every Positive Beverage gives you the essential vitamins, antioxidants and electrolytes your body needs for an entire day to keep you feeling positive. The twist of each cap opens a beverage with zero sugars, zero calories, zero carbs, zero sodium and 100% natural flavors. It tastes great- it’s good for you- it’s Simply Beneficial- That is Positive Beverage!

More on The Trevor Project can be found at: http://www.thetrevorproject.org