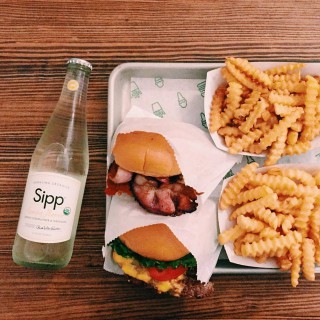 Shake Shack began in 2001 as a hot dog cart in Madison Square Park in Manhattan and now operates over 60 locations across the US, with plans to open hundreds more.
Union Station is Shake Shack’s fourth Washington, DC location, which opened in June 2014. Centrally located in the vibrant Capitol Hill neighborhood, the two-story Union Station Shake Shack is in the original West Hall of the restored and revitalized landmark building, which dates back to 1907.“We are excited that Sipp is a drink option in the extremely high traffic location of Union Station,” said Beth Wilson-Parentice, Founder/CEO of Sipp. “More and more fast casual restaurants are looking for better-for-you beverages to offer their guests. Sipp in Shake Shack is a healthier, higher-quality twist on the classic burger and soda.”

In late 2009, Beth Parentice set out to create a new, healthier soda alternative. After many months of mixing, testing and tasting, Sipp debuted at the Natural Products Expo in Boston and unveiled a brand new line of organic sparkling beverages sweetened with agave. Sipp has received celebrity endorsements as well as awards for packaging and flavors including Best Beverage of 2011 in Beverage World Magazine. Sipp has also been featured in FOOD & WINE Magazine as well as Martha Stewart’s Whole Living Magazine. Visit www.haveasipp.com to find a location with Sipp near you or to purchase Sipp online.

Founded in 2001 in Madison Square Park in Manhattan, what began as a hot dog stand is now one of the fastest growing fast casual restaurants in the United States. Shake Shack offers 100% all-natural Angus beef burgers, fries, custards, milkshakes, hot togs, as well as alcoholic and non-alcoholic beverages. For more information visit https://www.shakeshack.com.