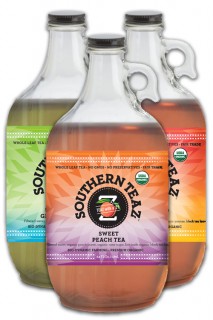 (Nampa, ID) – Today, Southern Teaz, has announced production changes and a new distribution deal with UNFI that represents multi-state growth for the fast-emerging organic tea company. After a promising First Quarter that was highlighted by major expansion throughout Northern and Southern California, with product on the shelves of all Sprouts Markets, the brand is now establishing a thorough presence in both Oregon and Washington after also being picked up by New Seasons Markets.

As consumer demands for organic food and beverages continue to fuel the sector’s growth, Southern Teaz has proven to be ahead of the wave with its holistic farming practices and Non-GMO teas. In addition to their expanded distribution, the company is also adding a new flavor, Pear Green Tea, to further diversify their brand portfolio. While the new product launch and national growth are major changes, equally as important in 2015 will be the company’s choice to move their production out of California in response to the state’s historic drought.

Company spokesman, Jacob Morrow stated, “We’re in a very exciting place right now; the organic beverage market is blossoming, and our teas are being well received by consumers in all markets. Still, our bottom line is not our only measure of success, maintaining social responsibility is a major priority for us. With that in mind, we’re moving our packaging out of California, which will save the state millions of gallons of water during this crisis.” While production facilities are changing, the increased distribution promises that consumers will be even more likely to find their favorite Southern Teaz varieties at a multitude of stores throughout the region.