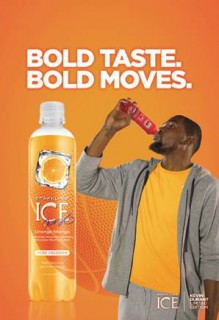 Seattle, WA (February 9, 2015) – Sparkling ICE®, part of the Talking Rain® Beverage Company portfolio, together with brand ambassador and partner Kevin Durant, will launch a series of exciting initiatives in New York City, kicking off on February 9th.  The week will include the debut of a limited-edition Sparkling ICE bottle, new Sparkling ICE billboards and taxi toppers, and a contest for fans to attend the Rn 1st Annual Roc city classic Starring Kevin Durant x Kanye West sponsored by Sparkling ICE on February 12th.

The week of festivities will mark the next phase of Sparkling ICE’s “Bold Taste. Bold Moves.” campaign featuring Durant.  Launched in November 2014, “Bold Taste. Bold Moves.” celebrates Durant’s career, both on and off the court, as part of an advertising campaign for the fastest-growing beverage brand in the U.S.  This next phase of the campaign introduces a limited-edition bottle for Sparkling ICE Orange Mango, the star athlete’s favorite flavor, featuring Durant’s signature and a custom basketball graphic on the label.  In early 2015, the bottles will be available in New York City retailers while supplies last, and will be launched nationally in November 2015 to celebrate the start of the 2015-2016 NBA season.

To amp up the fun, Sparkling ICE will have a bold presence at the Roc Nation-produced pop-up concert featuring Kanye West in the Flatiron District of New York City on February 12th. To celebrate with devoted fans of the brand, Sparkling ICE is offering a chance to win tickets by entering here or texting “BOLDMOVE” to 95577. One hundred lucky winners will receive two tickets to a once in a lifetime concert on the streets of New York. The sweepstakes begins 12:00:00 P.M. EST on February 6, 2015 and ends 8:59:59 A.M. EST on February 11, 2015. For more information and official sweepstakes rules, please visit: http://concert.sparklingreward.com/enterboldmove.aspx.