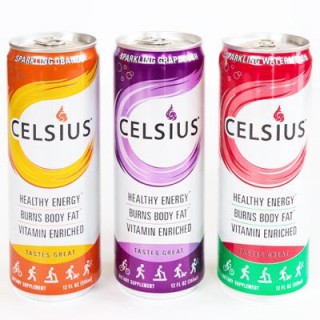 BOCA RATON, FL / ACCESSWIRE / June 8, 2016 / Gerry David, President and CEO of Celsius Holdings, Inc. (OTCQX: CELH), the creator and marketer of Celsius®, the world’s first negative calorie drink backed by clinical science, has been named one of only 25 Gold Winners recognized globally in the prestigious CEO World Awards®. David was selected as “The Leader” in the CEO of the Year category, recognized for his crucial role at the helm of the rapidly-expanding brand. Winners will be honored in San Francisco on Monday, June 27, 2016 during the annual SVUS Red Carpet Awards Ceremony Dinner.

The CEO World Awards were created to honor and generate industry-wide recognition for the achievements and positive contributions of CEOs spanning every business arena across the globe. More than 40 judges comprised of a broad spectrum of industry voices from around the world, and over 200 CEOs were nominated. Their average scores determined the 2016 CEO World Award winners.

Mr. David’s broad experience in manufacturing, product development, marketing, sales, regulatory, supply chain and finance provides the leadership a company requires as it grows aggressively both domestically and internationally. At the young age of 27, Mr. David opened his first startup, growing the company to cover six states before going public. He has over 20 years of experience in the technology sphere, having held executive roles at IBM, Honeywell and GTE, and more than 21 years of experience in consumer products with companies such as HSN Direct, Oxyfresh and Vitarich Labs. He has personally led three startups, overseen turnarounds at five companies and successfully managed businesses spanning 72 countries.

“It’s an honor to be named a winner by CEO World Awards for this esteemed industry and peer recognition,” said Gerry David. “This award not only speaks to Celsius’ ability to stand out among a saturated beverage market through exciting initiatives that break through the clutter and put Celsius at the forefront, but is also a testament to our employees’ commitment, work ethic and dedication to the brand, without which this recognition would not have been possible.”

About Celsius Holdings, Inc.Celsius Holdings Inc. (OTCQX: CELH) is a global nutritional science based company, founded in April 2004. Celsius® negative calorie drink is available in the form of ready to drink and powder formulas powered by MetaPlus™, a proprietary blend of quality ingredients including Green Tea with EGCG, Ginger, Taurine, Gaurana, and B and C vitamins. Backed by multiple published university studies, drinking Celsius before exercise has been proven to help burn more body fat, burn 100 calories and more per serving and provide healthy energy.

Celsius comes in seven delicious flavors, carbonated and non-carbonated, and also in powder stick formulas that can be mixed with water. Celsius has no preservatives, no aspartame, no high fructose corn syrup, no artificial flavors or colors and is very low in sodium. The Celsius line of products is vegan and kosher certified, Gluten Free, and sugar free. The first university study was conducted in 2005, and additional studies from the University of Oklahoma were conducted over the next five years. All studies were published in peer reviewed journals and validated the unique benefits Celsius provides to the consumer.

About the CEO World Awards

Learn more about The CEO World Awards at www.ceoworldawards.com.

Forward-Looking StatementsThis press release may contain statements that are not historical facts and are considered forward-looking within the meaning of the Private Securities Litigation Reform Act of 1995. These forward-looking statements contain projections of Celsius Holdings’ future results of operations and/or financial position, or state other forward-looking information. In some cases you can identify these statements by forward-looking words such as “anticipate,” “believe,” “could,” “estimate,” “expect,” “intend,” “may,” “should,” “will,” “would,” or similar words. You should not rely on forward-looking statements since Celsius Holdings’ actual results may differ materially from those indicated by forward-looking statements as a result of a number of important factors. These factors include, but are not limited to: general economic and business conditions; our business strategy for expanding our presence in our industry; anticipated trends in our financial condition and results of operation; the impact of competition and technology change; existing and future regulations affecting our business; and other risks and uncertainties discussed in the reports Celsius Holdings has filed previously with the Securities and Exchange Commission. Celsius Holdings does not intend to and undertakes no duty to update the information contained in this press release.