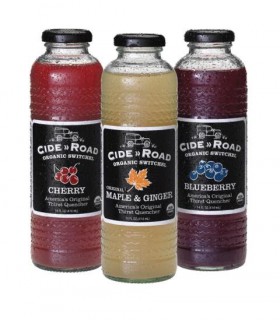 “Switchel is a fast growing category in the natural channel. Cide>>Road started in a handful of Kroger stores last year and we are thrilled that they are expanding our presence into these new stores.” says Cide>>Road Founder, Kevin Duffy.

Founded in 2014, Cide>>Road is a beverage company and leading producer of switchel. The core ingredients of switchel are apple cider vinegar, maple syrup and ginger. This combination creates a healthier functional beverage that’s extremely refreshing. Switchel is a drink that datesback to colonial times and was often referred to as Hay Maker’s Punch. The co founders and pioneers in this beverage category, Kevin Duffy and Hilary LaForge, a husband and wife team,conceptualized the company after a drive down a “side road” in Vermont. They stopped at a local general store that sold its own switchel mixture. After tasting switchel, Kevin developed his ownunique switchel blends and thus created Cide>>Road in order to share this drink with family,friends and now the world.

Every day, the Kroger Family of Companies makes a difference in the lives of eight and a halfmillion customers and 431,000 associates who shop or serve in 2,778 retail food stores under a variety of local banner names in 35 states and the District of Columbia. Kroger and its subsidiaries operate an expanding ClickList offering – a personalized, order online, pick up at the store service – in addition to our 2,231 pharmacies, 784 convenience stores, 323 fine jewelry stores, 1,387 supermarket fuel centers and 38 food production plants in the United States. Kroger is recognized as one of America’s most generous companies for its support of more than 100Feeding America food bank partners, breast cancer research and awareness, the military and their families, and more than 145,000 community organizations including schools. A leader in supplier diversity, Kroger is a proud member of the Billion Dollar Roundtable.