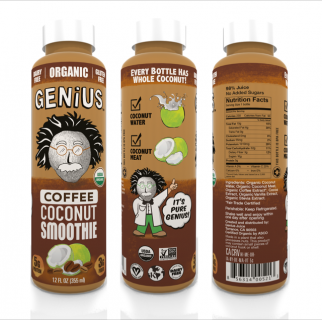 “We are in the process of sending out opening orders and the product will be on shelf by October of this year for a majority of regions, and WF Chicago Midwest will be January 2017.”

To support our launch into these new regions, Genius heavily believes in having broker coverage in all regions they are in. “Green Spoon and Yin Yang have come through in a huge way for us yet again, by presenting and achieving placement in Whole Foods, representing our brand in the best possible way. We are truly grateful for their help and guidance.”

“It also lines up perfectly with our launch of the new Coffee Coconut Smoothie SKU this October, which we have been working on for over a year,” said the founder, Alex Bayer.

The coffee flavor will debut in WF SoPac region, WF Midwest, and they are pushing to also slot it in the Rockies and North Atlantic by October as well. “This October is a huge growth spurt and jump for us, going from 1 region to 5 regions,and also debuting a long awaited second flavor.” Impressively, Genius has achieved already significant national growth with only 1 SKU since June 2015.

Genius also recently on-boarded with Natural Grocers, being slotted in for 75 stores for their launch.

Genius Juice is under global review with Whole Foods and they are hoping come early next year, the brand will be approved nationally. “It’s obviously a very exciting time for our brand. We have been through so much already in 2016, refining our process from HPP to pasteurizing, and switching to co packing, it’s been a lot of growing pains. We feel we are in a much better place, our product is selling, and we are gaining national placements very quickly.”

Genius recently welcomed a new angel investor, The Litchfield Fund, investing in Genius at a strategically perfect time when the company is gaining traction.

“We are currently looking to complete a pre series A round of $750k total, which will primarily be used to fuel the growth into all the newly activated regions and the new coffee flavor launch. We also have strong expectations to be brought into more Whole Foods regions early next year globally. In addition, we are launching a 3rd flavor in March 2017, the Vanilla Protein coconut smoothie which requires capital to launch nationally and marketing/trade expenses as well.”

“We are knocking on a lot of doors, and we are getting much more interest and traction with investors since we have a growing brand which is innovative and disruptive, and quite a compelling story as well.”