“Outlaw is a great partner because it’s right in line with everything me and my fans are about,” said Aldean. “I know my fans can relate to having a good time whether it’s at a show, at a game or just hanging out with friends and Outlaw tastes great while keeping you going.” 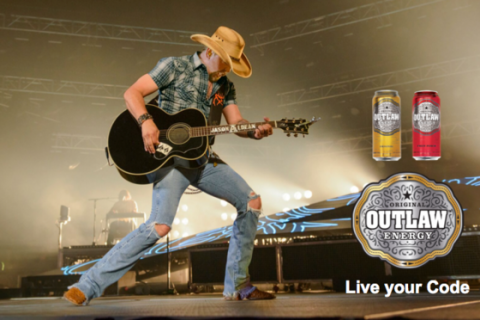 “Outlaw Energy is for folks who live the life on their own terms – their own code. Our code is about giving them real energy to live their life to the fullest with a great taste and at a fair price,” shares Outlaw Energy CEO Doug Weekes. “We were lucky to meet a great artist like Jason who immediately understood who we are and who were are trying to reach. He has lived his entire life and career by his own code and is a great role model for what we’re about.”

Between blistering guitar riffs and blustery choruses, the coveted ACM Triple Crown winner taps into the universal connection he shares with fans every night on the road with his new single “Lights Come On.” Now available to Country radio and at all digital retailers, the track serves as the lead single from his upcoming seventh studio album due out this summer. Then new music follows OLD BOOTS, NEW DIRT which debuted at the No. One spot on Billboard’s Country Albums Chart, earned its PLATINUM certification only nine weeks after release and spawned three consecutive No. Ones, marking 16 career chart-toppers. Aldean has “never been afraid to let his diverse musical interests influence his sound” (The Oklahoman) as each album released has earned PLATINUM or better tallying more than 10 million album sales.