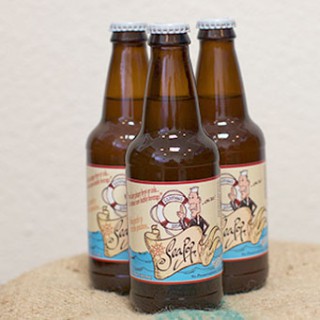 Sebastopol, CA (July 20th, 2016) – SeaPop Beverages announced today the release of the world’s first Soothing Soda®, SeaPop. The ginger-based drink was invented by musician Les Claypool to be a great tasting beverage while helping calm his motion sickness. “After rupturing my inner ear years back, I sometimes felt sick while on the ocean. Which is a problem, because I love to chase fish yet I hate taking the motion sickness drugs,” Les said. “So, I worked for a few years on a natural drink that would help ease the adverse effects of motion and upset stomachs in general.”

The result is SeaPop (SRP: $2.99), which tastes like a ginger snap dipped in vanilla ice cream. Utilizing ginger, chamomile and a blend of other traditionally calming herbs, the soda is not only soothing for the stomach, but a well-balanced and refreshing beverage. The soda would be good for people who get queasy during car rides, trips via airplane and those all-important fishing expeditions.

While SeaPop makes no claim to cure or prevent any type of motion sickness or nausea, it does use a unique blend of historically soothing herbs to help ease discomfort associated with motion, stress and digestive imbalance. “I drink it in the evenings,” said Les. “The calming herbal blend is a good wind down to a long day.”

There is a complimentary sampling at Petaluma Market on July 29th from 11am to 2pm. The soda is already available in several stores in Sonoma County. More details on the locations and times of additional samplings will be posted at SeaPop.com.

Founded in 2015, SeaPop Beverages is a small-production soda manufacturer. The mission of SeaPopBeverages is to be the industry leader in nutraceutical drinks that taste as good as they perform. For more information on SeaPop Beverages, visit SeaPop.com