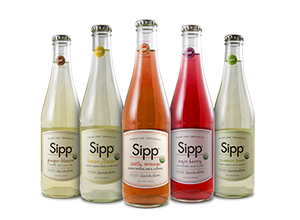 With nine distribution centers throughout the country, Dot Foods is able to provide less-than-truckload redistribution services to manufacturers looking to deliver their product to distributors nationwide in the most efficient and cost effective way possible.

Dot Foods has no individual product line minimums, which allows distributors to order small quantities of products at a time, giving flexibility and options to the restaurants they serve.

Dot Foods will deliver Sipp’s current line of five flavors (Ginger Blossom, Mojo Berry, Summer Pear, Lemon Flower, and Zesty Orange) to their customer-base of over 4,000 distributors in all 50 states across the country.“We are very excited to begin this partnership with Dot” said Joshua Rosinsky, Vice President of Sales at Sipp. “It means we will now have national distribution capabilities that we’ve never had before. This will allow for independent restaurants to now have access to the fast growing specialty soda category through Dot.”

In 2015, Sipp made great headway into the foodservice channel, landing placement on fast casual restaurant menus across the U.S., including Le Pain Quotidien, Luna Grill, Fresh and Co., Shake Shack in Washington D.C.’s Union Station, and more. Most notably, Starbucks has been carrying the sparkling beverages in their Southern California locations since August 2015.“

Our partnership with Dot Foods will further expand Sipp’s reach into the fast casual arena,” said Beth Wilson-Parentice, CEO and founder of Sipp. “We are seeing such positive momentum and feedback from fast casual restaurants and popular cafes. Their customers are demanding high quality, unique beverages like Sipp.”

In addition to fast casual restaurants, Sipp can be found in many natural and specialty grocery chains and independents. The brand will also be entering 1,200 Target stores in April.

About Sipp Eco Beverage Co.In late 2009, Beth Parentice set out to create a new, healthier soda alternative. After many months of mixing, testing and tasting, Sipp debuted at the Natural Products Expo in Boston and unveiled a brand new line of organic sparkling beverages sweetened with agave. Sipp has received celebrity endorsements as well as awards for packaging and flavors including Best Beverage of 2011 in Beverage World Magazine. Sipp has also been featured in FOOD & WINE Magazine as well as Martha Stewart’s Whole Living Magazine. Visitwww.haveasipp.com to find a location with Sipp near you or to purchase Sipp online.