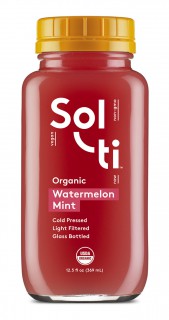 Ryne O’Donnell is passionate in his belief that organic foods provide greater health benefits as compared to conventional ones. He also views cold-pressed juice as an ideal format for greater consumption of organic produce. That line of thinking led the creation of Shakti, which O’Donnell launched in 2014. Recently renamed as Solti, the brand is unique among packaged cold-pressed juices based on its use of glass bottles and short wave ultraviolet (UV) light filtration as a means of eliminating food pathogens.

A former tech account executive, O’Donnell asserts that Solti’s process of exposing juice to UV light, in conjunction with an atmosphere controlled aseptic filler, “is proving to have more nutrients, flavor, aroma and shelf life” than juices that undergo high pressure processing (HPP), a common safety method for cold-pressed juices.

O’Donnell contends that HPP, which uses pressure instead of heat to inhibit bacterial growth and extend shelf life, removes essential nutrients and microorganisms from juice. Moreover, HPP requires liquid to be sealed in plastic bottles, chemicals from which can leak into the juice and detract from the freshness and fullness of the flavor, he says.

Solti’s production methods exceed U.S. Food and Drug Administration guidelines for bottling juice, according to O’Donnell, who notes that UV light filtration has been used on food products for decades. A company press release from September, 2015 states that the FDA “approved the use of UV-C Light Filtration as a means of purification in 2000, and the effects were found to be minimally invasive, leaving juice in its most raw form.”

Solti is primarily sold direct-to-consumer and also distributed across California at independent natural food stores, including Mother’s Market and Gelson’s. The juices retail for approximately $7 for a 12.5 oz. bottle; Solti is also sold in a 15.5 oz. size and offered in kegs for food service clients. O’Donnell hopes to bring Solti to shelves at Whole Foods and other large retailers soon, and a recent boost in production could bolster the brand’s prospects.

In April Solti completed a $2 million capital raise led by executives from craft brewery Ballast Point. A majority of the funding went toward the construction of a new 15,000 sq. ft. facility in San Diego, which significantly expands the company’s production capacity.

O’Donnell knows that the plant won’t be the largest cold-pressed juice facility in the U.S. — category leader Suja operates in San Diego as well — but scale is not his primary mission. Instead, he wants Solti to be known for producing the highest quality juice possible. In his view, a sustained focus on quality will give Solti a critical edge in the competitive landscape for cold-pressed juice and enable the brand to maintain a premium price.

“It’s this race to the bottom [in terms of prices]” he said. “Our overall philosophy is, if you make the best product on the market, and you’re different, and you’re top-shelf, then you can command a premium price. You truly have to have a different product. [Solti’s] glass packaging and the flavor and aroma and nutrient content is truly special.”