6 June, London.The UK’s leading Matcha brand, Vivid, has announced it is removing all sugar from its drinks. Sugar is scientifically proven to impede brain function over time and so the move is a natural next step for the fast-growing category of ‘energy drinks for the mind’. To coincide with the announcement, Vivid today unveils a whole new range with zero sugar or sweetener in Original, Lemon, and Elderflower flavours.

Vivid is made with Matcha, a superfood for the mind, high in natural caffeine and L-theanine, both of which increase mental alertness. Its three new flavours will replace the original sweetened range, which has already gained a big following with students and millennials, and continues to secure new retail listings as its customer base swells. 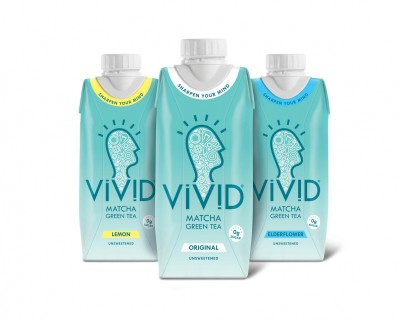 Since the brand launched in 2013, Matcha has enjoyed a huge upwards trend, growing out of specialist health shops (Holland & Barrett and Whole Foods) and into supermarkets (Waitrose) as consumers increasingly look for ways to boost energy and concentration without turning to unhealthy ingredients. It is thought that Vivid is the first brand to remove all sugar from its products since the introduction of the so-called ‘Sugar Tax’.

In Vivid, natural caffeine provides an energy boost, while L-theanine, an amino acid that stimulates alpha waves in the brain, results in a calm and settled mind. Matcha is made with pure, high-grade green tea leaves that have been picked and ground into a fine powder in Japan, and has been used for thousands of years by Buddhist monks to aid meditation. L-theanine is found almost exclusively in tea, with Matcha containing it in super-high concentrations.

Outside of high street retailers, big tech companies, banks, and universities have been quick to adopt Vivid. Brands including Google, Wired, the chess club at Oxford University, Goldman Sachs, Imperial College London, LSE and Facebook supply the drink to students and staff as an alternative to energy boosting drinks and coffee – which commonly result in a slump when a sugar or caffeine crash kicks in.

“We are axing our sweetened range, a move planned long before the sugar tax came in, because we are committed to delivering a product with unrivalled positive effects on cognitive performance, and that means no sugar. The big players will be reformulating or lobbying to fight sugar tax legislation for years, but the science is clear on how much sugar impacts on brain performance over time – going completely sugar-free will not only help Vivid be more effective as a drink to focus the mind, it will also be leading the trend for zero sugar products on the go.”

The new Unsweetened range has been created in response to 1research showing that a high sugar diet affects cognitive function and performance by blocking memory receptors. The new variants are also zero fat, less than 5 calories each, and will be available in Waitrose, Whole Foods, Holland & Barrett, Planet Organic and Selfridges from 6th of June. They will retail at an RRP of £1.89 per unit. Vivid will also be one of the first brands to include Jamie Oliver’s proposed sugar per teaspoon labelling on pack.

An above the line campaign for Vivid through Exterion Media will be going live in June on the London Underground.

To contact the Vivid press office, email vivid@wearetheromans.com or call 020 7012 1838

Vivid was founded in 2013 by James Shillcock to support bright minds and pioneer a new category – zero sugar and healthy energy drinks to sharpen the mind. Vivid is made with Matcha, green tea leaves which have been cultivated to produce additional chlorophyll, and then ground into a fine powder. Matcha contains natural caffeine and an amino acid called L-theanine which stimulates alpha waves in the brain, resulting in feelings of calm and concentration. L-theanine can be found almost exclusively in tea but Matcha contains the highest level.

Matcha has been used for thousands of years by Buddhist monks to aid focus in meditation. Vivid is the leading on-the-go drinks brand containing Matcha.