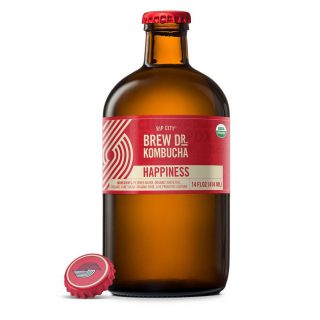 PORTLAND, Ore. — Portland-based Brew Dr. Kombucha, one of the fastest growing kombucha companies in the U.S., introduces its new Special Edition Rip City Happiness Kombucha bottle in collaboration with the Portland Trail Blazers. From now through the end of the NBA season, this limited edition kombucha will be served in the Moda Center, and at retailers throughout Oregon and Southwest Washington.

“Athletes at every level are paying more attention to organic and healthy diet choices,” said CEO and Founder, Matt Thomas. “Brew Dr. Kombucha provides tasty refreshment, while also providing probiotic health and wellness benefits, and is made entirely of 100% organic whole ingredients. It’s a drink for our time, from players, to fans, to kids playing youth sports. We’re thrilled the Blazer organization recognized this opportunity to support a healthy beverage option for its fans.”

As a proud partner of the Portland Trail Blazers, Brew Dr. Kombucha launches this collaboration as part of the Moda Center’s mission to support local food and beverage producers.

Thomas continued, “If you had told me in 2008, when I started brewing kombucha at our NE Alberta Street Teahouse, that one day we’d have a Trail Blazers bottle, I would have never believed you. We’re very proud to be the first Kombucha offered inside an NBA stadium and represent our home team with our new Rip City Happiness collaboration.”

Brew Dr. Kombucha has been making 100% raw, probiotic kombucha since 2008 using the same whole leaf teas and botanicals they serve at their Townshend’s teahouses. Every bottle of Brew Dr. is packed with naturally occurring live and active cultures, and produced entirely in-house, from leaf to bottle.

Townshend’s Tea Company was started by Matt Thomas in 2006 with the idea of serving great teas in a casual teahouse setting. Over the years, the effort of presenting the wide world of tea to their guests has expanded the Townshend’s collection to over 120 tea offerings, including classic teas, rare varieties, chai latte recipes made from scratch, Taiwanese bubble tea, and an herbal apothecary line. The company now operates nine teahouses in Oregon, Montana and Utah.

In 2008, the company began making Kombucha in the kitchens of their then two teahouses, giving it the name Brew Dr. Kombucha. It was only natural for them to choose some of the same great tea blends they had developed for service at their popular teahouses and ferment those into Kombucha. It turns out that approach is unique, as the majority of commercially available Kombucha is flavored with juice at the time of bottling. Brew Dr. Kombucha’s flavor profiles come from attention to the quality and formulation of the organic tea and botanicals used, creating a difference you can taste.

Today, Brew Dr.’s organic 100% raw kombucha can be found in all 50 states and across Canada