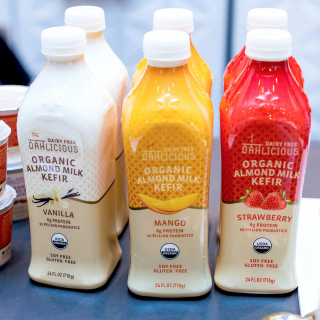 Dahlicious, maker of a line of organic lassis, or milk-based Indian-style smoothies, is gearing up for the launch of its first non-dairy product: an organic almond milk-based kefir.

The Leominster, Mass.-based brand unveiled the new line, which will be launching this June in 24 oz. plastic PET bottles and available in Mango, Vanilla and Strawberry varieties, in January at the 2017 Fancy Food Show in San Francisco.

In an interview with BevNET, Dahlicious co-founder Jaidesh “JD” Sethi explained that part of the decision to start producing plant-based non-dairy products came from his and co-founder Ajeet Khalsa’s roots in India, where Sethi said most people are vegetarian but still incorporate dairy into their diets.

“There is an innovation piece to this that really excites us, but there’s also a philosophical angle,” Sethi said, noting that many of the company’s employees are vegetarian. “If you look at other almond milks, they are already high in sugar, very low in protein and good stuff. Our philosophy is we want an equitable exchange. We want our yogurts, our kefirs, our almond milks, to be similar in nutrition profile to dairy milks. That’s what makes us different.”

Sethi said the forthcoming almond milk-based kefir has been in development for almost two years, during which the company experimented with several base ingredients, including avocado, flax, chia, coconut and cashew before settling on almonds because of their nutritional value. In order to retain the protein and fats that Sethi said are often filtered out when creating almond milk, the company designed new technology that can grind the nut to a microscopic level so that, when integrated with water, it will mimic the composition of dairy milk.

“Being in the dairy industry, we understand the composition of milk,” he said. “In the end, we get a product that uses the whole almond. You take almonds, add water, then in the end you get very high fat, high protein, high fiber almond milk.”

Yet Dahlicious will not be selling the almond milk itself; the company’s focus will be on cultured products, such as the dairy-free kefir, which contains 5 grams of fiber and 6 grams of protein, and also on yogurt.

The launch of Dahlicious’s dairy-free kefir line coincides with an evolution in the company’s distribution strategy. Up until 2016, the brand focused on building in the natural channel, leading to distribution in most Whole Foods regions as well as in Sprouts. This year, Sethi said the company will start branching into conventional grocery outlets including Safeway, which recently began stocking Dahlicious products in one division. They are also building a presence in the mass retail channel, as evidenced by launching in a division of Costco earlier this year, with further expansion into the retailer’s Southwest region set to follow in April.

While Sethi said that developing their own line of products is the priority, Dahlicious has also been working to expand its co-packing business. He said that private label production represents about 25 percent of the company’s sales, and that they have been working with “a couple or large brands and other national retailers.” He also indicated that that could grow, as the brand’s 25,000 sq. ft. production facility, capable of producing 100,000 lbs. of yogurt per day, was not operating at full capacity yet.

“We’ve been asked many times about why we are vertically integrated,” Sethi said. “The answer is simple: it gives us the opportunity to generate a cash flow by doing co-packing, which is an integral part of our business plan, which calls for a healthy blend [of both private label and our own brand].”