As the old show tune goes, a spoonful of sugar helps the medicine go down.

In developing a new line of 2 oz. apple cider vinegar shots, Ethan Hirshberg more or less followed those guidelines, minus the actual sugar. For his formulation, the first under his eponymous brand, Hirshberg tweaked the equation — he swapped out sugar for organic fruit juice and natural sweeteners and used organic white apple cider vinegar as the “medicine” — but the intention behind it is essentially the same: to create an appealing delivery system for an ingredient that’s not so appealing on its own.

“I wasn’t looking at this as taking a disruptive angle [on the category],” said Hirshberg, son of Stonyfield Organic co-founder Gary Hirshberg, in a call with BevNET. “What I wanted personally was a better way of drinking apple cider vinegar that wasn’t necessarily sitting down and drinking 16 oz. of it, but having an efficient and tasty delivery of a healthy ingredient that I want. If I wanted something, I figured there were other a lot of people out there who would also want the same thing.”

Indeed, consumer demand for apple cider vinegar-based beverages has been rising as part of the overall trend of products with digestive health benefits. Over the past year, category leaders have been expanding their offerings; KeVita added three new flavors to its vinegar tonics line, while Suja launched a new line of organic drinking vinegars made with apple cider vinegar, juice, probiotics and water. The challenge for Hirshberg wasn’t to build the category itself, but to develop a product and a place within that category where it could thrive.

That process began with formulation. Each shot — packaged in a single-serving 2 oz. glass bottle in Ginger Pineapple, Maple Cinnamon, or Turmeric Apple varieties — contains 4 teaspoons of pasteurized, organic apple cider vinegar and around 6 grams of sugar from organic fruit juice and/or a natural sweetener like honey, maple syrup or agave nectar. According to Hirshberg, striking the ideal balance between the sweet, tart and spicy flavors in each SKU was critical to connecting with consumers both familiar and new to the apple cider vinegar category. 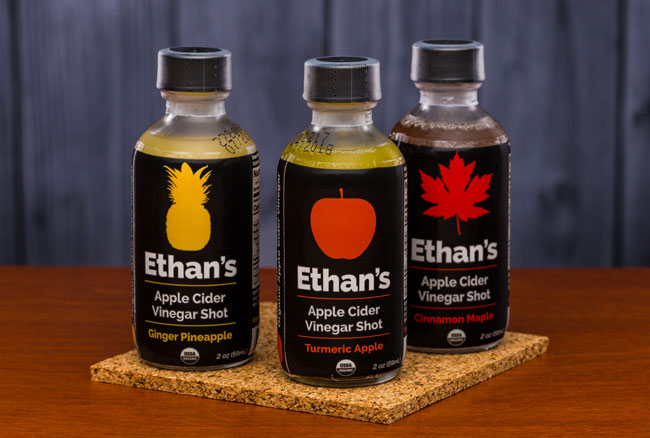 “Basically, the goal was to find that perfect line between feeling healthy and doing what it’s supposed to be doing, which is make it taste better,” he said. “Turmeric and ginger were the first flavors; I personally love those two and they fit in well with what people want out of their drinks. For the third, we want to give an offering to someone who is maybe a little hesitant about getting into drinking vinegars or just needs a more friendly and familiar taste profile, which is where the Cinnamon Maple came from.”

Yet despite delivering a complex taste profile, apple cider vinegar is primarily consumed for its purported health benefits, which Ethan’s is keen to emphasize. The brand’s website features brief but detailed summaries of scientific research on the effects of consuming vinegar, as well as ginger, turmeric and other ingredients, written by Leanna Shea, the company’s on-staff product nutritionist.

“It’s become a great selling point for this product — not just the four teaspoons of apple cider vinegar, but all the other ingredients are included at a functional level based on her research,” said Hirshberg, noting that Shea helped determine how much of each of those ingredients to use per serving. Though he described the company as committed to approaching product development from a research-based perspective, he also noted that package labeling abstains from making any health claims. “Whatever reason [consumers] want to drink it’s sort of like ‘here you go, here’s a convenient way of drinking it,’” he said.

The 2 oz. shot format, which has a suggested retail price of $2.99, provides that convenience, while the 16 oz. bottle, which contains the equivalent of eight shots and is priced at $8.99, is the value proposition. Upon launching at Whole Foods this week, beginning on the East Coast and rolling out to other regions through the month, each format will also provide a different merchandising opportunity: the shots will be stocked on ambient shelves in the Whole Body department, while the larger bottle will be available chilled alongside other probiotic beverages in the grocery section.

In founding his brand, Hirshberg became the second generation in his family to enter the food and beverage business. But while his family — which also includes first cousin Jon Cadoux, founder of Maine-based craft brewery Peak Organic — are involved in an advisory capacity, Ethan’s has been established outside of their shadow. The company, which has three full-time employees and has been backed by angel investors thus far, operates out of Boulder, Colorado and manufactures the product using a co-packer in Florida.

“It’s a blessing and a curse sometimes,” Hirshberg explained of his background in the business. “There’s some food and beverage experience in the family and I’m definitely leaning pretty heavily on that.”

If any parallel can be drawn from his father’s experience at Stonyfield to Hirshberg’s current venture, it may be the challenge of pushing a concept health conscious consumers are already familiar with — apple cider vinegar rather than organic dairy products, in this case — to a broader mainstream audience. In tweaking the flavors and delivery format within an established niche category, Hirshberg is aiming for a breakthrough.

“I think the biggest challenge and the biggest question mark is when we — ourselves and all the other companies entering this space — try to kind of make that bridge into the conventional channel,” he said. “We obviously all kind of live in our health food world, and there’s definitely success to be had there, but what happens after that and how do we get this beyond the people who are already eating healthy, drinking healthy, and have the income to access these products? Looking beyond that, I think the big question mark is can this product or can these products access that new consumer.”