Back in 2011 when Grady Laird first got into the cold brew coffee business, he spent as much time educating consumers as he did making product.

“When we first started, everyone thought we were beer. Nobody knew what cold brew was,” said Laird, co-founder and CEO of Grady’s Cold Brew, speaking with BevNET from the company’s production facility in the Hunts Point neighborhood of South Bronx. “We had to demystify the process.”

The cold brew landscape looks much different in 2017: from hip startups to the established CPG titans, beverage companies of all kinds are looking to take a larger piece of the multi-billion dollar U.S. market. Grady’s has done its part to fuel that growth: aside from its core product — a concentrated version of New Orleans-style cold brew made with chicory, available in kegs, bottles and bag-in-box — the brand offers pre-filled “bean bags” that allow consumers to make their own cold brew at home. This fall, Grady’s is seeking to further expand the brand with the launch of its first RTD offering, Lil’ Easy, a pre-diluted, single-serve version of its cold brew concentrate packaged for portability. 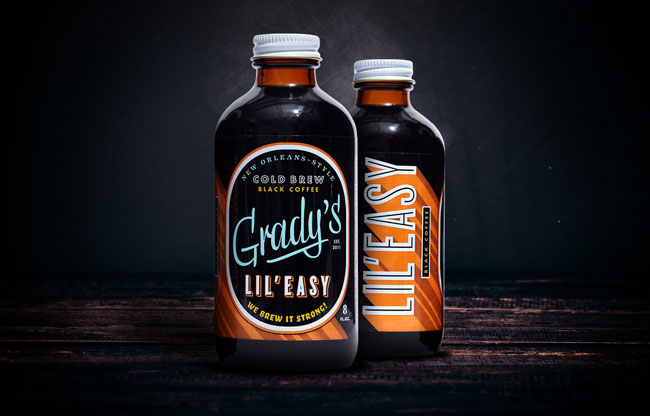 “Convenience is the main drive,” explained Laird of the concept. “We just knew we wanted this RTD option, something for people who were familiar with our concentrate and brand but needed something right then. In terms of flavor and value, all of that is consistent with our [original] product.”

Laird said that adding an RTD product would enable Grady’s to leverage the equity it has established in the natural channel and compete inside grab-n-go coolers at smaller sized markets. Both 8 oz and 16 oz Lil’ Easy sizes, priced at $2.99 and $4.99 respectively, have soft launched at independent retailers in the Northeast, with further national distribution yet to be determined.

“I have a feeling that [Lil’ Easy] will be able to move faster than even the concentrate did,” said Laird, adding that the company is exploring both dairy and non-dairy versions of the line. “I really think that we are kind of at three fronts in the grocery store: we are at the grab-and-go coolers at the beginning, we’re next to the juice and milk in the dairy section, and we are in the dry coffee aisle with the bean bags. Those are three distinct areas that you would go for different reasons.”

Recent moves behind the scenes have created the conditions to allow Grady’s to make this leap forward. It closed a new round of investment from friends and family over the summer, raising over $1 million which Laird said would be directed mainly towards expanding sales staff and making upgrades to brewery equipment inside its 15,000 sq. ft. production facility.

“Up until this point, it’s always been about production,” said Laird. “We were never able to produce as much as the demand was. We finally shored that side of things up with the Bronx brewery which has been operating for over a year, and now we all our resources are going towards sales.”

The diversity of Grady’s offerings has also allowed the company to play outside of just retail. While natural grocery is still its largest segment, Grady’s has also partnered with keg supplier Joyride Coffee to provide on-draft cold brew coffee — available in concentrate, RTD black or RTD nitrogen-infused varieties — in New York City, San Francisco, Los Angeles and Boston. The company has also developed a version of its bean bag kits specifically tailored for food service opportunities which Laird said have drawn interest from some national chains. The dry, non-perishable bean bags have also proven to be versatile enough to fit in across a range of non-food retailers: in addition to Urban Outfitters and Anthropologie, Laird said sales have been strong in outlets like The Home Depot, West Elm, Sur La Table and World Market. 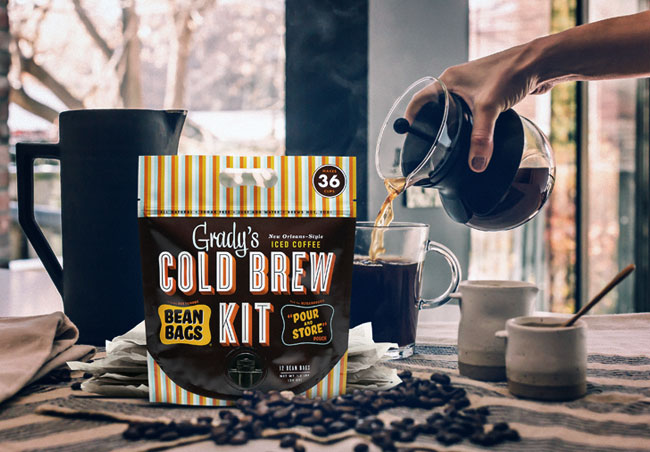 “There’s so much out there in cold brew;you can’t do everything,” he said, noting that the company will look to to add a food service sales manager as its next hire. “We are trying to be strategic and be smart about where we grow. We’re not opening coffee shops, not opening kiosks right now. But in terms of really going after retail, foodservice and ecommerce, that is all true.”

As further confirmation that Grady’s can compete with cold brew’s biggest players, Laird pointed to the recent release of brew-at-home kits by Starbucks and Dunkin’ Donuts.

“We are extremely proud of our innovation,” he said. “Seeing huge companies like that introducing similar products is flattering and crazy and vindicating all at the same time.”