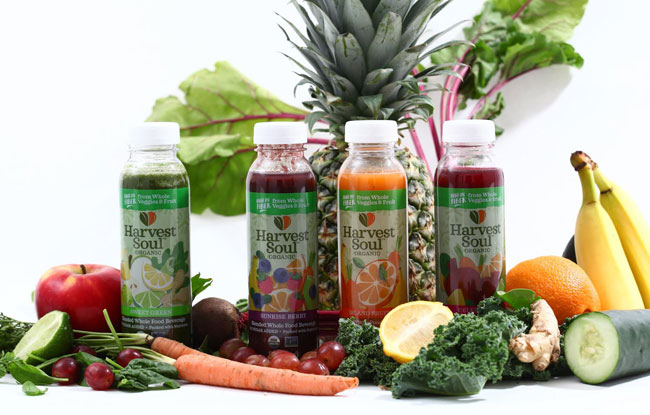 In a super-premium juice category brimming with cold-pressed offerings, Harvest Soul Organic Juice is bucking the trend. As V.P. of Marketing Rani Quirk puts it, the company’s product line is the “anti-pressed juice.” She describes them as “blended whole food beverage[s]” made from fruit and vegetables that retain the fiber content that pressed juices lose.

Since launching in 2013, Harvest Soul has been refining its image. The company currently offers eight SKUs: four in its core line and four probiotic juices. Now, coming off a research study that showed its consumers were seeking earthier branding, Harvest Soul announced a revamp of its core line. The updated look features new packaging that highlights the brand’s hearty health benefits with painterly illustrations on its labels. Harvest Soul plans to update the packaging for its probiotic line in the coming months.

“It’s very kind of homemade if you will, and that inherently is more appetizing,” Quirk said. “It looks kind of tailor-made for somebody. Versus a big machine putting something in a bottle, this looks very hand-crafted.”

Notable on the new label is the altogether absence of the term “juice” except where it’s legally required, a strategic decision that CEO Kevin Quirk said helps to differentiate the beverage’s unique process. The products are categorized as juices, and he noted that while the blended property of the products are likely to draw comparisons to smoothies, they lack the dairy and added sugars that fill a large segment of the category.

Based in Atlanta, the Quirks founded Harvest Soul in response to the “disappointing” juice landscape, Rani said. As CEO, Kevin was formerly as a marketing director for Minute Maid at The Coca-Cola Company as well as a tenure as CEO at White Hat Brands and as an executive assistant at Anheuser-Busch throughout the 1990’s. Rani brings marketing experience, including positions at Sprout Foods and AddONE Marketing Solutions.

Harvest Soul is focused on driving trial via online coupons and consumer shows and has placed less emphasis on demoing, Kevin Quirk said. The brand is currently sold through Amazon and has roughly 700 retail accounts with distribution through KeHE. The company is focused on utilizing data analytics in order to benefit from Amazon’s growing presence in the CPG marketplace. The product has an SRP of $3.49-3.99 and includes Celery Beet, Island Fruit, Sweet Green, and Sunrise Berry varieties in its core line.

In April, Harvest Soul moved into a 30,000 sq. ft. cold production facility, giving it added capacity that has enabled the company to grow more rapidly, Kevin Quirk said. The facility is also an USDA organic certified co-packer, and Harvest Soul is currently working with 10 clients.

Similar to the rapid maturation of the energy category, Kevin Quirk sees the same evolution taking place in pressed juice. He believes “whole food beverages” is where the category will eventually land.

“We think that [what happened in energy] is happening with the pressed juices,” he said. “Now there are some great companies out there, I won’t say they’re great brands but they do really well, and we think there is an opportunity in the market sitting next to them at price parity.”