Consumers are buying into new kinds of store programs and formats that better fit their needs– and it’s evolving the food industry as retailers know it, according to market research firm IRI’s Channel Performance Report released last month.

The report, which evaluates consumer shopping patterns across retail channels from conventional to convenience, lays out a picture of the largest growth opportunities in retail for CPG brands.

“It’s become harder and harder to find growth opportunities in the CPG marketplace,” Susan Viamari, VP of thought leadership for IRI, in a statement. “The path to purchase has forever changed. Shoppers are becoming increasingly demanding and embracing an omnichannel environment. And they are funneling their spending to channel and retail banners that best deliver on their expectations.”

The multitude of channel options has resulted in fragmentation of dollars. Although researchers found that grocery retailers outperformed competing channels in the past year, with 41 percent of CPG’s $760 billion sales total, club and dollar retailers outperformed grocery in average annual growth over a three year period. 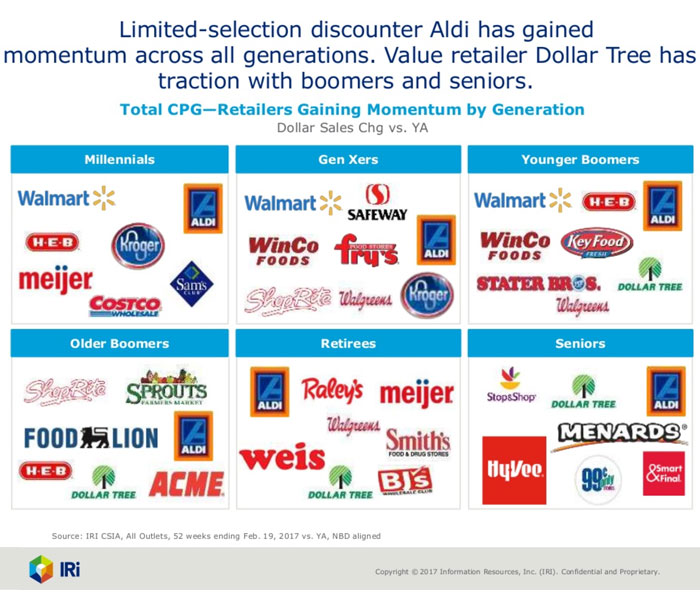 Part of this evolution can be attributed to when and how consumers are shopping. In 2016 alone, trips to grocery stores climbed 1.3 percent. But club and dollar also saw trip numbers rise, according to the report. Viamari told NOSH she thinks the increase is due to two growing motivations for when to shop: “just-in-time” shopping and “stock-up” trips. “Stock-up trips still account for 40 percent of CPG dollars. Clubs have done a nice job enhancing their private label offerings, which is key for consumers,” she said.

Additionally, smaller store formats, “click and collect,” and subscription-based e-commerce have affected how and when consumers shop.

“The rise in just-in- time shopping is a function of cash flow—spending carefully and just purchasing needed items, rather than buying extras or stocking up with today’s dollars for needs that won’t arise for days, weeks or months,” Viamari said. “It’s also a function of the fact that consumers do more eating on the run.”

The on-the-go lifestyle isn’t only shaping where consumers are shopping, but what they’re shopping for. The report found that refrigerated side dishes, spices and seasonings, and ice cream products that provided convenient transportation solutions within the better-for-you sector saw the greatest dollar sales growth over the last year.

Generational differences are also shaping the evolution of retail. Analysts found that millennials and generation X-ers prefer shopping the mass market and supercenter channels, with millennials spending 44 percent more CPG dollars in this channel than the average shopper. Alternatively, the report found younger baby boomers spend more of their money in the convenience channel, while seniors and retirees spend more heavily at drugstores.

When it comes to e-commerce, its share of CPG sales is expected to grow, but is still only at about eight percent of total grocery sales.

This range of desires is an indication of a divide among consumers. Groups with today’s greatest buying power– millennials and baby boomers– seemingly want very different things from their retail experiences and expect personalized experiences that cater to their needs. But Viamari said this doesn’t mean retailers have to choose.

“The key is understanding that different consumers—even consumers within the same ‘consumer segment’—have different needs and wants. Retailers and manufacturers need to invest to understand consumers as individuals,” she said. “There will certainly be overlap—and capitalizing on overlapping opportunities will obviously increase appeal across more consumer groups.”

The report notes personalization will be a key for success in CPG’s future. Retailers are already starting to make moves on this front, collecting data from loyalty programs, social media and mobile apps and then applying that research to improve buying and store layouts. This was the case with Target, who recently rolled out new small-format stores in order to double its presence in dense urban and suburban markets, and college campuses.

“The important thing is that retailers and brands take the time to understand their core and target shoppers…Understand how the shopper thinks when he/she is making a purchase decision, and then view the store through that same lens,” Viamari said. “It has become a very solutions-based world—shoppers are looking to solve a need when they shop. CPG retailers and manufacturers need to frame their products as solutions and tell a marketing story that makes the products — solutions– fit into the shopper’s world.”