Beverage brand incubator L.A. Libations has partnered with Trimino, the Connecticut-based makers of a line of protein-infused flavored waters which has rapidly expanded out of its Northeast origins and into grocery and box store chains across the country. And although L.A. Libations has a knack for picking up unique functional beverages, co-founder Danny Stepper told BevNET he foresees this brand growing larger and faster than most of the company’s new portfolio entries.

Trimino was founded in 2013 by entrepreneurial trio Peter Dacey, Robert Leary, and Casey Hoban. Dacey, who also serves as Trimino’s CEO, told BevNET that the idea for the brand came after the team saw an opening in the market for a healthy and tasty protein drink that could be consumed at any time of the day, not just during workouts. With 7g of protein per 16 oz. bottle, the brand offers an alternative to heftier protein shakes and encourages consumers to drink multiple bottles a day. The drinks retail between $1.99 to $2.49 per bottle, depending on retail location. 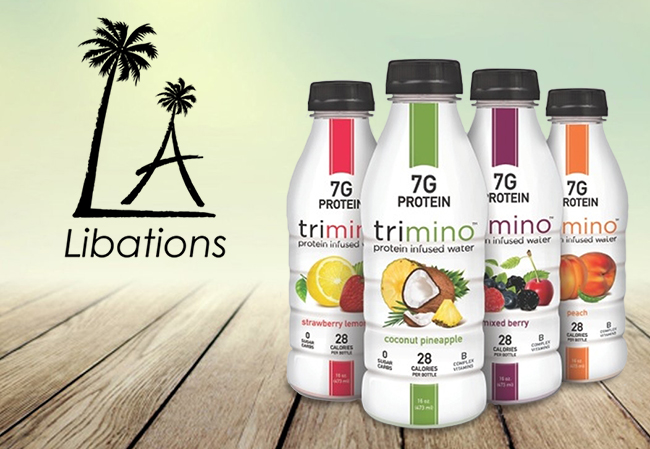 “We identified the trend of consumers looking to get more protein in their diets and that was the genesis of the brand,” Dacey said. “We saw a void in the market for a protein drink that people could consume multiple times a day so we did not want to go too heavy on the protein content. We knew that taste was very important and developed a profile we think delivers on both fronts.”

Trimino launched in Connecticut in the winter of 2014, Dacey said, and for the first six months was sold out of the back of the team’s cars. The business targeted the grocery channel and soon landed a deal with Northeast supermarket chain Big Y. The company expanded throughout New England and a friend later helped bring the brand to Texas, Dacey said. In 2016, the company saw major growth, signing with Polar Distribution for the Northeast, entering more major supermarket chains, and expanding into New York and New Jersey. The company added staff and brought on InterContintental Beverage Capital (IBC) as an adviser. Dacey believes the company is on track to continue its growth during 2017 as it lands new placement mainstream chains.

“Our goal was to launch in the Northeast and concentrate our efforts there to prove out the concept and brand,” Dacey said. “We wanted to get traction here, see that we were getting repeat buyers, that and that the concept was viable, before we expanded.”

According to Stepper, L.A. Libations first learned about Trimino through IBC managing director Stephen Horgan, who flagged the brand to him. L.A. Libations wasn’t the only company looking to extend Trimino presence on the market. Others had offered to bring to the West Coast, but the company turned them down, opting to wait for “the right time” to make the leap to California when Trimino executives were sure growth was sustained and operations were in place.

“Obviously, when you look at the volume per outlet that they’re doing and the traction it’s having, consumers are clearly voting with their wallets that they want this brand,” Stepper said.

Stepper said Trimino is an opportunity for L.A. Libations to “really go big” with a new brand and start by targeting major chain grocery stores. Protein-infused water, he said, doesn’t require the level of consumer education that other brands need, allowing Trimino to “leap frog and go straight for mainstream retail.”

The company has recently partnered with brands in more niche categories which typically require consumer education, such as ARYA curcumin-infused waters and Aloe Gloe.

“We’re really looking forward to taking this to our retail partners and getting it on the shelf and scaling based on the real traction we have in the Northeast,” Stepper said.

Although terms of the partnership were not disclosed, Stepper said L.A. Libations, which is partially owned by the Coca-Cola Co., Inc., “doesn’t do work for hire deals” and that the companies are committed to a long-term partnership “win, lose, or tie.”