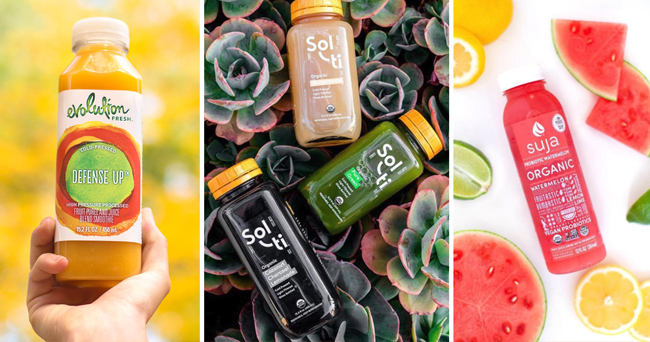 All sugars are not created equal. However, they’re all still sugars.

While the issue of sugar intake has long been an issue for sodas and shelf-stable juices, brands in the super-premium juice category aren’t immune to it either. While these health-haloed angels are known for their fresher, natural ingredients and typically abstain from using any added sugars, they still find themselves in a difficult position — adding some fruit juices for flavor can cause the sugar content in their juice products to quickly climb to levels that may deter the type of health conscious consumers for which they are designed to appeal.

In the face of the growing anti-sugar movement, juice brands are responding by refining their offerings and attitudes towards the formulation, marketing and processing of their products in divergent and innovative ways.

For any premium juice brand seeking to make its mark on the category, finding the right balance between sugar content and health can be a difficult task. As the CEO and co-founder of Suja Juice, Jeff Church has watched the market evolve over the last several years, and has made an effort to change along with the times.

“When we started, I think our average juice had roughly 25g of sugar per bottle,” Church said in an interview with BevNET. “I think today, five years later, it’s about 10g. We’ve listened to what the consumers have told us, which is that they don’t want so much sugar unless there’s a reason to have it. So we’ve been on a steady slope of innovating, ideally with less than 10g of sugar per bottle in mind.”

According to Church, the sea change in cold pressed juice towards lower sugar options is at least partially influenced by consumer demographics. 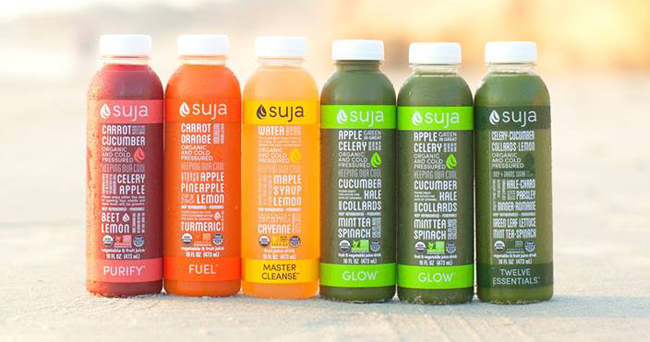 “What we’ve learned over time is that the consumer [for super premium juice] is much more heavily oriented towards the baby boomer, while our consumers are made up of millennials,” he said. “Both boomers and millennials like sweet things, but boomers will be much more tolerant of sugar than the millennial audience, even when they are both are looking for a sweet item. We kind of have to play to our audience; if we are going to do something sweet, it has to be something a millennial would like. That’s why our broad focus has been on reducing sugar.”

On the other end of the spectrum is Ryne O’Donnell, founder and CEO of San Diego-based Sol-ti, which produces a range of cold pressed juices, cold brewed teas and water. Taking the stance that “not all sugars are created equal,” he argued that the benefits of consuming juices made with high quality fresh fruits that may be high in natural sugar outweigh the potential downsides.

“My thought on health is probably different from a lot of people– [consuming] more raw and organic fruits and vegetables and whatever that is, if it’s from nature, that’s good and it doesn’t matter if it’s high in sugar,” he explained, adding that fruits such as berries, melons and citruses are among the “most healing fruits in the world.” “If [juice] is derived from a fruit or a vegetable and is not added in an extract or a powder or a liquid form, we don’t think about [sugar] at all.”

Beyond consumer concerns, however, lies a growing web of legal issues surrounding juice companies. While sodas and other sugar-sweetened beverages have been the primary targets for punitive taxes and class action lawsuits in recent months, some of the leading brands in premium juice have also been placed in the crosshairs of anti-sugar crusaders.

In August 2016, the U.S. Food and Drug Administration (FDA) determined that the use of the phrase “evaporated cane juice” by juice maker Odwalla, a subsidiary of The Coca-Cola Company, on its product ingredient labels was misleading to consumers and recommended that “sugar” be used in its place. The term was the subject of a class action lawsuit filed in 2013 in which the lead plaintiff, Robin Reese, stated that she would not have purchased Odwalla juices if she was aware they contained added sugar. Reese withdrew the complaint in June due to an inability to prove damages.

In an ironic twist, a separate class action suit was filed in March citing Odwalla’s use of “no sugar added” as a callout on packaging for its 100 percent juice products, with plaintiffs’ lawyers arguing that the claim is misleading because it implies such products normally contain added sugar. Odwalla responded that its use of the phrase was valid because its products compete against all other beverages that contain any amount of fruit juice, in which added sugars are common. The case is currently in private mediation to be completed no later than June 26,2018.

Last October, the Center of Science in the Public Trust, a consumer advocacy group, filed a lawsuit claiming that PepsiCo was misleading consumers through the marketing of certain SKUs of its Naked Juice products– such as Kale Blazer, Bright Beets, Chia Cherry Lime and Chia Sweet Peach– which used phrases like “just the healthiest fruits and vegetables.” As part of a settlement agreement reached this February, PepsiCo agreed to update the product labels on certain SKUs to include imagery that more accurately reflects the drink’s ingredients and to reduce the size of text used for the bottles’ claims of “100% Juice” and “No Sugar Added.”

These cases highlight the difficulty of establishing a clear and consistent message for a category caught between consumers’ interest in natural better-for-you beverages and their desire to reduce sugar intake. In the case of Naked, while its juice products are made from only cold pressed fruits and vegetables and contain no added sugar, they can also contain up to 61g of sugar just from those ingredients.

With the specter of sugar — and lawsuits — looming in the background, some juice brands have taken a proactive role in reducing sugar content. 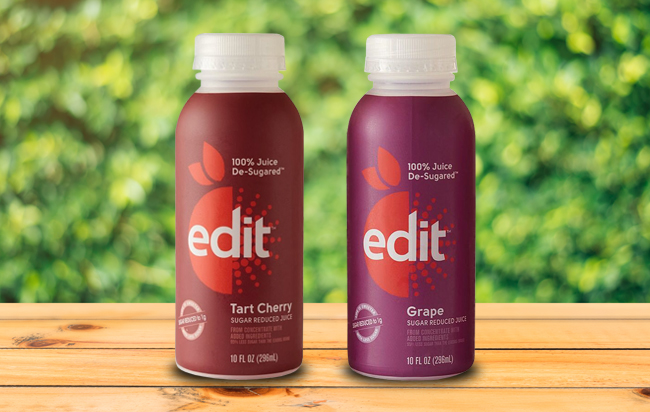 Traverse City, Mich.-based startup Edit Fruit Juice, founded in 2013, has approached the issue on a technological level. The company has developed a patented process to extract 90 percent of the naturally occurring sugars in 100 percent fruit juice, creating a line of “desugared” products that contain less than 1g of sugar per serving. Each variety contains between 10 to 40 calories depending on the SKU, and is sweetened with stevia. The company began selling its product in February 2016 at select Whole Foods locations in the Midwest.

To various degrees, other brands have also integrated natural sweeteners, such as stevia, monk fruit and erythritol, into juice blends. On one level, it makes sense: Suja, Caribe and other brands have used natural sweeteners in certain non-100 percent juice SKUs to reduce calorie and sugar counts. To others, including O’Donnell, adulterating pure juice with a sweetener is antithetical to the idea of keeping fruits and vegetable juices as close to their raw and natural composition as possible.

“If you think about nature, someone in the animal kingdom isn’t going to extract the vitamin c content from a plant and turn it into powder and have a big hit of vitamin c for their needs,” he said. “They’re not going to harvest the sugarcane, turn it into juice, then turn it into powder, then eat it because they want some glucose. They’re going to go eat the plant that has that in it.”

While most other companies have searched for less technical solutions, Church acknowledged that juice makers will have to address sugar either through reformulating existing SKUs, developing a larger portfolio of reduced sugar beverages or expanding into new non-juice categories altogether.

“I think that brands are going to need to migrate towards having lower sugar or they are going to lose in marketing,” he said, citing a “rough time” for major brands in the premium juice market. ”Sweet Beets had around 40g of sugar per bottle, and we reformulated to take it down to 28g per bottle. We did that because we felt we could and it would have a broader appeal from an audience standpoint.”

Church added that the pressure from other categories, specifically kombucha, was also having an impact on juice. Suja launched a four-SKU organic kombucha line in July.

“I think there’s a reflection of the growth in kombucha as a lower-sugar alternative,” he said. “We are hitting a tipping point in the mainstream with the belief that sugar is the devil. We’ve been talking about it for years.” 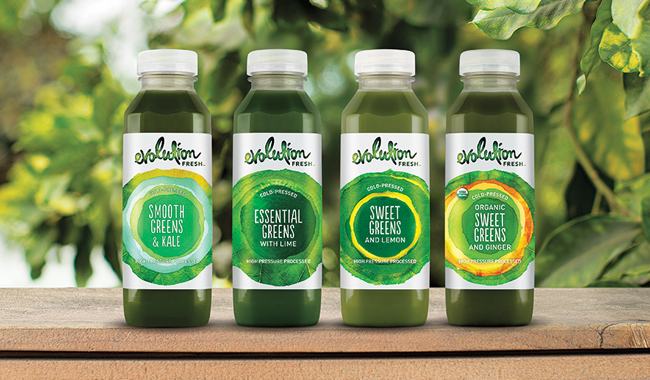 Yet it is consumers themselves who are the driving force pushing brands in the cold pressed juice category towards greater awareness of sugar content in their products.

“Overall it’s a real priority for us that the juices be delicious, that the sweetness and the flavor comes from the fruits and vegetables that are in the product,” she said. “We have a broad range of green juices which we know do really well because they are low sugar, and we’ve taken that insight and expanded that portfolio to make sure there is a green juice for everybody.”