Revive Kombucha today announced the completion of a $7.5 million Series B round of funding led by Peet’s Coffee. The capital infusion will be used to grow brewery operations, scale its staff, and expand its national distribution footprint, which will include Revive’s integration into Peet’s company-owned cold-chain Direct-Store-Delivery (DSD) network, Coldcraft.

“We are delighted to partner with Revive Kombucha, a company that shares a similar handcrafted approach to Peet’s Coffee,” said Eric Lauterbach, chairman of Coldcraft and president of consumer at Peet’s, in a press release. Lauterbach was also appointed to Revive’s board of directors as part of the deal. “Our investment reflects our belief in the strength and promise of the Revive brand and our own mission to build an outstanding portfolio with multi-channel reach.” 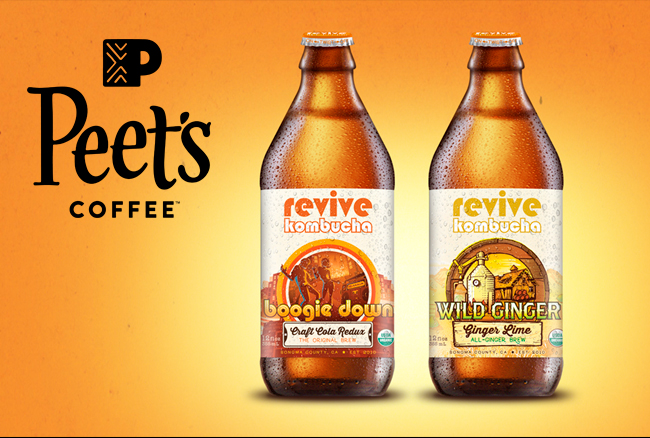 In May 2016, Revive secured $2.1 million in Series A funding in a round led by Ilya Nykin, a co-founder and managing director at healthy CPG venture capital group Prolog Ventures. Nykin also participated in this round and was joined by prior investors Bentley Hall, CEO of Good Eggs, and Peter Henig, a managing partner at Greenhouse Capital. Other investors in this round include Wes Crain of Rodeo Ventures, Arif Fazal of Blueberry Ventures, Seth Rodsky of Strand Equity and Larry Kahn of Beechwood Capital.

In an interview with BevNET, Revive co-founder and CEO Sean Lovett explained that after using the first investment to shore up the company’s brewing operations, he recognized the importance of partnering with a company that strongly aligned with its own culture and values.

“When we went into this Series B round, knowing it had to be a bigger check and a bigger partner, we wanted to make sure we understood the path we were walking down and who that partner was going to be,” said Lovett, adding the alignment gave Revive an “evergreen view.” “I think it’s really unique in the world of emerging brands to align yourself with a culturally aligned strategic in a Series B round.”

Lauterbach noted the shared emphasis on small-batch craft production between Revive and Stumptown Coffee, the super-premium coffee brand that was acquired by Peet’s in 2015. “We know if we are going to partner with another brand, that brand really has to share the ideals that Peet’s has or it’s just not going to be a cultural fit,” he said, calling kombucha “a natural adjacency to coffee from a consumer as well as a business perspective.”

Over the past year Revive has made major strides in national distribution at retailers like Whole Foods, Wegmans, Trader Joe’s and Fairway. Lovett believes that its integration into Coldcraft, the cold-chain DSD network established in May to supply Peet’s and Stumptown RTD cold brew products in California, represents an opportunity for the company to cement its position as the state’s dominant kombucha brand. The partnership will expand Revive’s presence to over 1,600 food service, grocery, and Peet’s coffee bar locations in California.

On a broader level, Lauterbach said that Peet’s views Revive as having application across its array of channels, including retail, wholesale, office supply and food service.

“Certainly part of what Peet’s brings to the table is access to multiple channels where we can put the two brands together,” he said. “My expectation is that it would be widely distributed at the right point in time within our retail locations. What we want to do first and foremost is there are a lot of connections we are in the process of making so we’ll get to that at the right point in time, but it’s not far in the future.”

Lovett said that Revive will look to expand its staff as the brand continues to scale nationally, but noted that the Peet’s deal will also give the company time and peace of mind to plan for the challenges ahead.

“We maybe won the state championship in high school and now we are playing pro ball,” he said. “The financial aspect allows us to have the wherewithal to look long-term on our growth strategy and what’s the best route to market and the best way to grow Revive in a really competitive category. We get to take a moment, take a deep breath, look out two, three, five years and say where does Revive want to be in that marketplace. We want to be a number one player.”