After launching in the San Francisco Bay area last year, Peet’s Coffee’s ready-to-drink cold brew coffee quickly gained a foothold in the market. Now, Peet’s, a premium coffee roaster and retailer, is looking to get a deeper share of the nascent cold brew category, expanding into all of California with the launch of a chilled direct store distribution (DSD) network.

The company announced today the creation of Coldcraft, a new business unit dedicated to cold brew coffee innovation and distribution. Coldcraft will focus on building the RTD and draft keg business for Peet’s and third-wave coffee producer Stumptown, which the company acquired in 2015. Peet’s operates as a subsidiary of German conglomerate JAB Holding Company and also owns a majority stake in cult coffee company Intelligentsia. 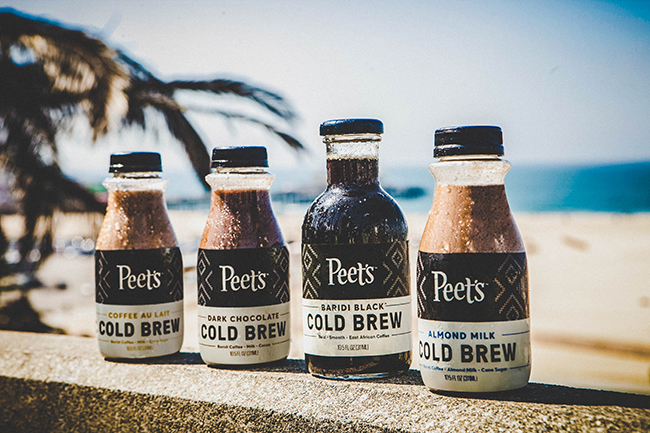 Speaking to BevNET, Peet’s CEO Dave Burwick said the offshoot unit will operate like a startup with the full support and resources of the company, going “deep” in the California market before looking at options to expand further next year.

Peet’s RTD cold brew launched in the Bay Area last summer via its own direct store distribution team and at the end of the year expanded into Northern California. Coldcraft builds off of this initial test market and last month its trucks rolled out into the southern part of the state.

Burwick said he felt it was important to have a separate entity for RTD cold brew in order to help Peet’s and Stumptown “play to win” in the hypercompetitive category. The brand has performed exceedingly well in Nielsen’s Bay Area analysis, outselling current cold brew titans such as Califia Farms, according to the company. With that taste of being on top, Peet’s isn’t just looking for success, it’s looking for victory.

Concurrent with the launch of Coldcraft, Peet’s has revamped its RTD cold brew line. Doing away with the previous school-lunch-style milk cartons, the coffees are now packaged in 10.5 oz. PET bottles and retail for $3.99 each. The company kept its Baridi Black, Cafe Au Lait, and Dark Chocolate flavors and has added an Almond Milk Cold Brew variety. According to Tiffin Groff, vice president and general manager of Coldcraft, the unit will have a large focus on building the Peet’s and Stumptown cold brew innovation pipeline, although Stumptown may move quicker than Peet’s. Moreover, Peet’s is launching Nitro Cold Brew on draft kegs for on premise, office, and college sales will become a prominent part of the business.

“There’s so much excitement here at Peet’s,” Groff told BevNET. “I feel that in our role as the original craft coffee, we’re going to take that to cold brew as well and set the stage for the trend.”