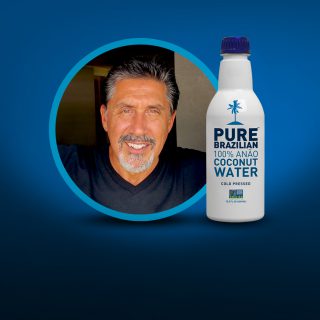 Pure Brazilian, a Cheyenne, Wyo.-based brand founded in 2013, markets coconut water made from young, hand-cut Anão coconuts that are sourced from company-owned organic farms in northeast Brazil. The drinks are Non-GMO Project certified.

“Of all the new brands that popped out in the last four years in this whole sort of functional beverage wave, by far the one that there was a lot of excitement around was WTRMLN WTR,” Garcia said. “If there was a brand that I really admired, it was them, and I know Rob played a huge role in that. So bringing that to Pure Brazilian will allow me to focus on partnerships and the creative side, which is also something I think we can really now take to the next level.”

Paladino, a graduate of West Virginia University, has over 30 years of experience as a consumer product and service industry executive. Following management roles at PepsiCo and MillerCoors, he joined WTRMLN WTR as CEO in 2014.

Under his stewardship, the brand reported 300 percent growth in 2016, along with an expansion of its retail presence to over 15,000 locations nationwide. The company also secured a capital raise led by CAVU Venture Partners in May; the funding round also included investment from Grammy-winning singer and actress Beyoncé.

Paladino will look to expand distribution of Pure Brazilian and and will also focus on optimizing the company’s supply chain and continue to grow its farm holdings.

“The strategic mission of Pure Brazilian to acquire plantations in Brazil’s northeastern states in the ideal Amazon biome, and controlling the supply chain from first planting, is a strategic advantage in a category projected to grow to $4.2B worldwide by 2019,” Paladino said in a press release. “It’s an honor to lead this Farm-to-Bottle mission working with an impressive team of founders.”

Having established a foothold at retail and secured reliable distribution through natural foods distributors UNFI and DPI, Garcia said Pure Brazilian was in a good position to bring in someone with Paladino’s experience.

“Here we have a case where distribution has been built,” Garcia said. “I think the brand has sort of evolved to a place where now I think bringing in someone with his experience is going to be very smooth.”