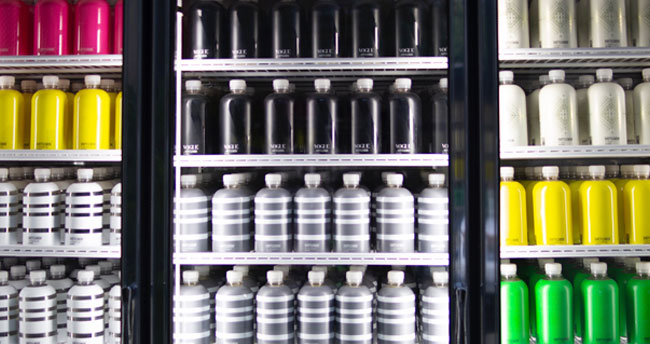 The world’s largest beverage company is now the largest investor in Dirty Lemon, which, since launching in 2015, has cultivated an enthusiastic audience on social media for its line of premium functional drinks that prominently feature on-trend ingredients such as turmeric, collagen and, for a brief period earlier this year, cannabidiol (CBD).

In addition to its products, which sell for $65 per 6-pack, the brand has turned heads with its innovative text message-based ordering system, a concept that was further expanded this summer with the launch of The Drug Store, a cashier-free store in New York City where product is dispensed via a tech-enabled honor system in which customers text what they’ve taken from store coolers after the fact.

Speaking with BevNET, Iris Nova CEO Zak Normandin said aligning with Coke gives the company the resources to be able to execute in a faster, more efficient way as it charts a path towards over $100 million in revenue by 2021.

“When we look at what we are trying to accomplish with Iris Nova, there really isn’t a better partner for us [than Coca-Cola],” said Iris Nova CEO Zak Normandin. “If you look at what Coke has accomplished globally with brands and distribution, it’s really something we are using as the model for Iris Nova and the brands we are launching. The partnership gives us the resources to be able to execute in a faster, more efficient way.”

The investment was made through Coca-Cola North America’s Venturing and Emerging Brands (VEB) unit, which is charged with identifying and supporting the growth of beverage brands with billion-dollar potential through investment or acquisition. Earlier this month, in announcing the integration of certain VEB brands into the larger Coke ecosystem, VEB president and GM Scott Uzzell said the move would allow the unit to “keep a rich pipeline of brands flowing into the Coca-Cola North America (CCNA) business” by identifying trends, investing quickly and supporting founders “so that when brands are thoughtfully graduated into CCNA they can scale with success.”

In a statement to BevNET today, Uzzell said, “As our company’s Futurist group, we are investing in thought-pioneers like Zak and companies like Iris Nova that can help us tap into consumer trends to bring even more products to market faster through new technology and innovation like c-Commerce. As we continue to evolve as a total beverage company, VEB will always seek to invest in and learn from people, products, technologies and companies that have a vision of what the future could be.”

Iris Nova is set for a busy 2019, as Normandin said the company is set to launch two new brands: Tres Limón, a non-alcoholic aperitif, in Q1 and a second non-alcoholic drink to follow in Q3. The former will be available in glass bottles and focused initially on hospitality channels as a way to acquire new customers, who can then use the text-based ordering platform to buy a canned version of the product that is shipped direct. In addition, Dirty Lemon’s product portfolio will be rapidly expanded with the release a new SKU each month starting in January.

Along with their own brands, Normandin said Iris Nova has allocated $1 million to invest in other beverage brands this year. 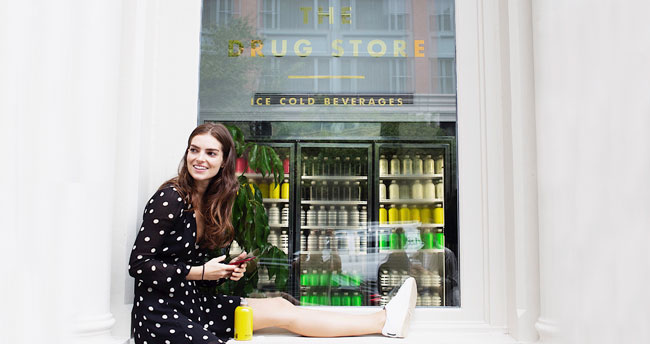 Part of Dirty Lemon’s growth strategy is introducing new retail stores. Normandin said the look and feel of the stores, which will open in Manhattan, Chicago and Miami, will echo the neighborhoods in which they are located. Along with serving as a way to introduce consumers to the brand, the stores will also serve as testing grounds for new beverage concepts in a live setting; mixologists will craft handmade versions of Dirty Lemon drinks, with the option of adding alcohol. The data harvested from those interactions go into product R&D, according to Normandin.

However, Dirty Lemon’s future will not include advertising on Facebook and Instagram, two pillars of social media on which Normandin said the brand had spent “millions and millions of dollars” since its launch. Calling it “unsustainable,” he said the company shut off advertising on the platforms two weeks ago and plans to keep it down for the entirety of 2019.

“It’s at a place now where the market is so cluttered that it doesn’t really make sense as a channel to acquire customers,” Normandin said about Instagram. “Instead of acquiring customers on a one-off basis, we are looking to invest in experiences. The Drug Store is a big initiative in that direction, and beyond that we are looking at a lot of non-traditional advertising to support sales growth through 2019.”

Retired baseball star Alex Rodriguez, former AOL CEO Tim Armstrong, and actress/entrepreneur Kate Hudson also participated in the funding round. Normandin said that along with Rodriguez and Hudson the brand has a dozen celebrity investors that are close to the company.

“Rather than relying on one [celebrity], I think everyone is working together to pool thoughts and ideas,” he said.

Normandin offered an update on its discontinued Dirty Lemon +CBD product following today’s passage of the 2018 Farm Bill, which removes cultivation and sale of hemp from federal prohibition under the Controlled Substances Act. He said the brand has no plans to reintroduce the product until the U.S. Food & Drug Administration (FDA) declares that it can be used as an ingredient in food or dietary supplements.

“While there was some turmoil, it has opened up the door to a much higher volume facility which will allow us to scale and grow exponentially in the years to come,” he said. “They have capacity beyond HPP, and that’s really the most exciting part for us. We don’t want to be focused specifically on one production process. We want to be able to do glass and cans and aseptic all in one, and the new facilities allow us to do that.”